Some young people in Ballymun spend 150% of income on cannabis 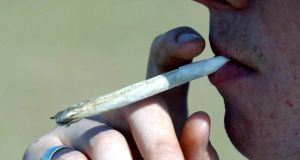 One in five said they had some sort of drug-related debt ranging from less than €50 to nearly €1,000. Photograph: PA

Some young people in one of Dublin’s most marginalised areas are spending up to 150 per cent of their weekly income on cannabis.

According to a new survey of young cannabis users in Ballymun, participants spent an average of €108 a week on cannabis, or €5,185 a year.

However, one cohort in the study, which was made up of young people not employed and not in a training programme, reported spending an average of €152 a week on the drug (€7,930 a year). The study states this cohort would typically receive €100 a week in jobseekers’ allowance.

“This suggests that participants may have other sources of income in order to sustain their use patterns,” the authors wrote.

The small study was carried out by the Ballymun Youth Action Project, a State-funded charity, to address drug and alcohol addiction in the area.

Ninety-six people aged 16-21 from the area who had left school and were not in employment were surveyed. The group comprised 66 males and 30 females.

More than half of the respondents said they were regular cannabis users with those in training reporting lower levels of cannabis usage compared to those who were not. The study found the average user started smoking cannabis at 14 years old.

More than 50 per cent of users said they spent an average of three to six hours under the influence of the drug per day.

One in five said they had some sort of drug-related debt ranging from less than €50 to nearly €1,000.

The study was carried out in the context of increased debate about the legalisation of cannabis and the increasingly strong strains of the drug that have become available in recent years.

The authors said youth workers had noticed in recent years higher levels of young people not attending training appointments “and those who did attend were demonstrating low levels of motivation”.

They said youth workers were concerned about the impact of heavy cannabis use on young people at a time when the Government was examining permitting cannabis for medical use or even full decriminalisation.

The authors said the increase in high-strength cannabis was particularly concerning.

The Equal Youth Development Partnership is an EU-funded project that supports agencies dealing with young people who leave school early.