Over 1,000 service personnel march through Dublin to highlight work on frontlines 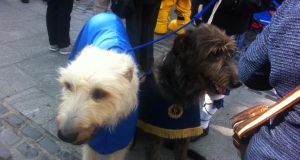 Corporal Keelagh is arguably the most popular officer in the Defence Forces. She is placid, one of a rare breed; although it must be said her bite would be far worse than her bark.

This elegant, dark coloured Irish wolfhound is the official army mascot and, as well as being a star of the stage and screen, is a non-commissioned officer (NCO).

“She has full military rights and anyone messing with her will be court-martialed,” confirms Tracey Carroll, her owner and handler.

“And they get better rations,” adds Des Mulreaney whose own blonde wolfhound Mr Darcy is winning similar numbers of hearts and minds for the ambulance service.

As the pair patrolled the grounds of Trinity College Dublin on Saturday afternoon, their mission was to help promote two of the many organisations whose activities are on public display for the Emergency and Security Services Day.

In the cobbled grounds of the university, sirens and flashing lights enlivened the crowds of passers-by, whose questions on anything from first aid to bomb disposal were fielded by enthusiastic volunteers and professionals.

There were nurses, fire fighters, St John Ambulance volunteers, soldiers, gardaí, Civil Defence, Coast Guard and fully equipped RNLI volunteers with everything required for a major operation bar water. Mountain rescue teams abseiled down the side of the old exam hall while below, children whizzed about on garda segways.

The day’s proceedings began with a parade on O’Connell Street where modern and vintage vehicles with over 1,000 service personnel marched to the beat of drums and the bluster of bagpipes, all to remind the public of the efforts going into our frontlines.

“It’s just to bring awareness to our organisation which is a charity with volunteers that commit huge time to training and are always on call,” says Lorraine Galvin of the RNLI which has shifted its philosophy from saving lives to preventing deaths. It wants to halve the number of people drowning every year through education and awareness.

In a far corner the army Ordnance Corps, or bomb disposal unit, displayed its hi-tech robots which are made in Tralee, Co Kerry. In their absence, it comes down to the brave soldier in the giant armoured suit, duly on display.

“You would be tired now, standing in that,” a military man tells an intrigued onlooker. “It’s six stone. It’s a small person.”

The whole day is about these little known facts, each designed to tweak the imagination of the public, and to consider a world which often remains unknown.

The Civil Defence proudly shows off Max, its own canine pride and joy. He is a highly effective sniffer dog who helps locate human remains and is worth about €15,000 fully trained, says Dublin officer James McConnell, adding that he only searches when you put his collar on. “It’s like a Superman cape. Otherwise he would be in work mode all the time.”

The Civil Defence has 462 volunteers in Dublin. Established to deal with situations arising from the Cold War, its mandate today is primarily to help with crowds in emergency situations.

“Kids come in and see this equipment,” says McConnell indicating the plethora of vehicles and gadgetry on display. “It’s what gives them an interest and makes them say: ‘I want to join this, or the army, or the fire brigade.’ It all starts with the voluntaries.”

That sense of pride in sacrifice isn’t lost on Brian Kenny who spent years in the army’s Reserve Defence Force, formally the FCA.

“People say we don’t need the army; we do,” he says. “You can’t train a group like that overnight so you have to have them trained in order to step in if you need them. The reserves were the cheapest army in the world.”