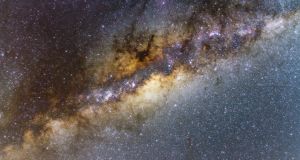 The Central Milky Way seen from Mangrove Mountain, New South Wales. The image show the centre of our galaxy which is rich in bright nebulosity as well dark obscuring clouds of dust and gas which show up as dark lanes in a sea of stars. Photograph: John O'Mahony 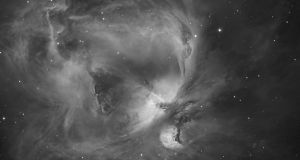 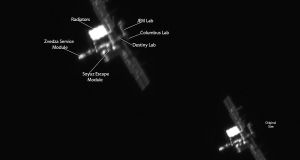 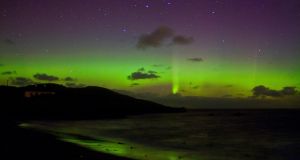 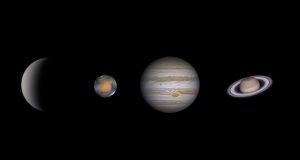 ‘Four Planets’: the composite image of Venus, Mars, Jupiter and Saturn was taken by John McKeon 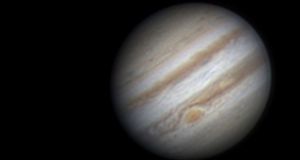 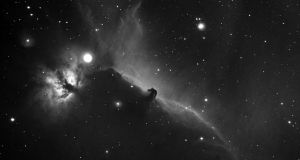 The Flame Nebula and Horsehead Nebula photographed from Glasnevin, Dublin by John Dolan 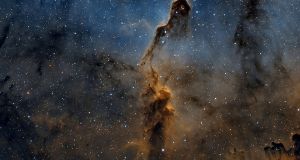 The Elephant’s Trunk Nebula photographed from Spain by Brendan Kinch 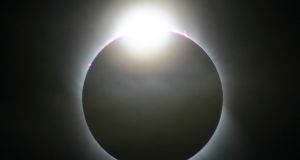 The diamond ring effect photographed from Turkey by Dave Lillis 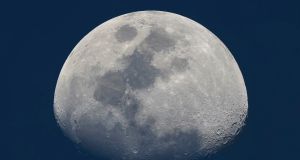 ‘Blue Sky Moon’: photographed from Monasterevin, Kildare by Michael O’Connell. The photograph won the ‘Our Solar System’ category in the 2008 International Astronomy Photographer of the Year competition 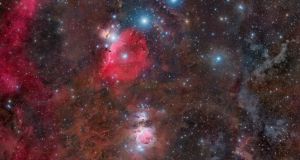 Part of the Orion image by Tom O’Donoghue and Olly Penrice. It was captured over a four-year period, with the image processing taking a further six months to process

Visitors to the National Botanic Gardens in Dublin are in for a rare treat next month during the first major exhibition of photography by Irish astronomers.

The art of capturing the stars on film and, more recently, with digital cameras has become very sophisticated, but as you can see from the examples here Irish astronomical photographers are no slouches. The photographs by enthusiastic astronomers were taken from various locations around Ireland and from locations abroad favoured by clear skies and reduced light pollution.

As the earth is always moving and long-time exposures are the norm, computer-programmed tracking devices are sometimes used for long exposures to keep the lens on target.

For bright objects such as planets short video photography is used. Over a two-minute video clip as many as 3,000 images may be captured, but just 300 images clear of atmospheric turbulence, dust and light pollution are retained to create the finished result. For deep sky objects such as galaxies, colour cameras or mono cameras can be used. DSLR cameras give good results using the internal colour filters.

This allows more light to enter the camera, resulting in a much clearer final result. The use of specialist filters such as hydrogen alpha (H-a), sulphur (SII) and oxygen (OIII) ones allows the astronomers to capture aspects of space invisible to the naked eye.

The images on show will feature several Irish winners of the International Astronomy Photographer of the Year competition organised by the Greenwich Observatory in London.

While some of the most impressive images in the exhibition were taken on very sophisticated cameras, it is possible to take good photographs of the night sky with modern consumer equipment.

“Observing and taking photos of what appears in the sky at night is a fascinating hobby which is becoming more popular in Ireland,” says John Dolan of the Irish Astronomical Society.

“Telescopes can now be obtained at reasonable cost and recent advances in digital photography have made taking photographs of the night sky more accessible. Many of the photographs in this exhibition have been taken using standard consumer DSLR cameras. The low light capability in these cameras has greatly improved in recent years.”

While the exhibition is for the public, aspiring astronomical photographers will also find inspiration and the advice they need to take their first steps.

Broadcaster and space commentator Leo Enright will open Images of Starlight on February 2nd. Entry is free and it runs until February 21st.