Rancid ‘balls of fat’ wash up on north Mayo coastline

Putrid smelling globules may be linked to pollution at sea, says Coastwatch Europe 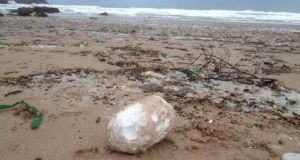 An example of a palm oil ball which can be toxic to dogs found on Fistral beach in Cornwall. Photograph: Dave Meredith

Foul smelling globules resembling balls of fat on the north Mayo coast may be linked to a pollution incident at sea, says Coastwatch Europe.

The globules have washed up on the shoreline near Elly Bay and on Cross beach, west of Binghamstown on the Mullet peninsula in Erris, in recent weeks.

Glengad resident Diane Taylor says her dog became quite ill after trying to eat several of them.

“They are shaped oddly, about tennis-ball size, smell like diesel, and are hideously greasy,” said Ms Taylor.

“They tend to come in on a heavy tide and can be found among seaweed,” she said. “Dogs tend to be attracted to them and that’s how I spotted them first.”

She has come across them on three occasions since late summer.

Coastwatch Europe co-ordinator Karin Dubsky has been leading a survey of shorelines over the past few weeks, but said she had not heard of reports of the globules in other areas.

“It is typical for oil dispersants used in pollution incidents at sea to form into fat balls over time, but the relevant State authority should have been notified,” she said.

Another possibility is ambergris, the “vomit” of sperm whales, but this tends to transform from a faecal smell to a musky aroma – hence its value in the perfume industry.

In May of this year, dog walkers in Wales and Cornwall were warned about a waxy substance resembling palm oil washed up on beaches.

Cornwall’s countryside service said that the natural edible vegetable oil can be released legally at sea by ships, but can then become contaminated with other waste products in the marine environment.

Animals can become very ill if they consume it on shorelines, it said. It is also harmful to marine mammals.

The Irish Coast Guard said it had not received any specific reports in recent weeks and added there had been no recent notifications of pollution incidents in this sea area.

It has responsibility for monitoring the coastline in tandem with local authorities, and is responsible for pollution within the 900,000sq km Irish exclusive economic zone.

Dispersants to treat oil pollution should not be used within the Irish zone without its authorisation, said a spokesman.