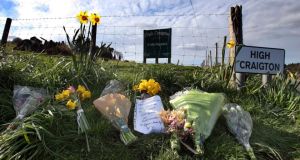 The usual quiet of rural Scotland was shattered by the comings and goings of a large press pack and, every so often, a flurry of activity as police vehicles arrived to make their way up to the hillside farm where the body of Karen Buckley was found.

The area is near picture-postcard perfect with a striking backdrop of the Campsie Fells .

Just over 10km north of Glasgow, High Craighton Farm is on the Stockiemuir Road, one of the main tourist routes to Loch Lomond and Ben Lomond Mountain looms large in the distance.

It remained unclear what led police to focus their search for Ms Buckley on the grounds of a neatly maintained whitewashed farmhouse on the brow of the hill.

But it was to here on Wednesday that a large number of officers, including a police incident truck and three fire brigade vehicles, made their way as part of the search for Ms Buckley.

At 1.40am on Wednesday, Police Scotland issued a statement confirming that human remains, believed to be those of the 24-year-old Cork nurse, had been found.

“Officers have recovered human remains on a farm north of Glasgow on the outskirts of Milngavie,” it said.

They later confirmed that the remains were those of Ms Buckley who had been missing since early on Sunday.

Few further details have been released by police but the activity at the farm, which includes a cluster of five residences close together and is shielded by a screen of pines, remained low key.

Most visible police activity was confined to maintaining a secure perimeter around the holding with several hundred metres of tape zigzagging its way around roads and sheds to keep the public and media out.

A police dog team arrived at the scene but a set of halogen lamps near the entrance to a yard suggested that perhaps much of the intensive police work had been done during the night.

What is certain is the death of Karen Buckley has touched people in Glasgow – as evidenced by a simple bouquet of flowers left by the farm with the message: “The Rose beyond the Wall.”