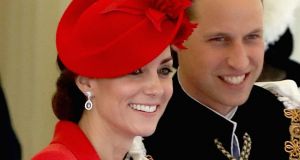 The Duke and Duchess of Cambridge at the Most Noble Order of the Garter Ceremony at St George’s Chapel, Windsor Castle, west of London, June 13th, 2016. They will visit Northern Ireland on Tuesday, June 14th. Photograph: Chris Jackson/AFP/Getty Images

The Duke and Duchess of Cambridge will visit Northern Ireland on Tuesday.

William and Kate, who also have the titles Baron and Baroness Carrickfergus, will attend Hillsborough Castle in Co Down for the annual garden party hosted by Northern Secretary of State Theresa Villiers.

It is their second visit to the North and their first as a married couple. They had also been in Belfast five years ago, a month before their wedding.

At the time they were hosted at City Hall by then lord mayor Pat Convery and Dame Mary Peters, the former Olympic pentathlon athletics champion who was then the lord lieutenant of the city.

About 2,500 guests drawn from a wide cross-section of Northern Irish society, including the voluntary and community sectors, local charities, youth organisations and wider civil society, will also attend the event at the castle.

The serving secretary of state for Northern Ireland has hosted the garden party event every year since 1984.

Hillsborough Castle is the official residence of the British royal family when they are in Northern Ireland, and the home of the Secretary of State since the early 1970s.

A royal guest of honour attends each year.

The Queen and The Duke of Edinburgh were guests in 2014 and last year the Earl and Countess of Wessex made the trip.