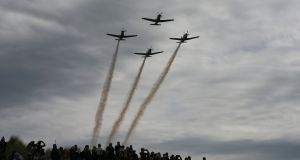 The Air Corp performs a fly past during a ceremony at Banna Strand in Co Kerry to mark the centenary of the capture of Sir Roger Casement. Photograph: Niall Carson/PA Wire. 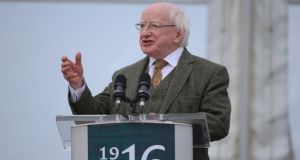 President Michael D Higgins speaking during a ceremony at Banna Strand in Co Kerry to mark the centenary of the capture of Sir Roger Casement. Photograph: Niall Carson/PA Wire.

Thousands of people have attended a commemoration marking 100 years to the day since Roger Casement landed at Banna Strand in Co Kerry from a German submarine.

Locals clambered up on sand dunes and ringed the wide expanse of beach where Casement, Robert Monteith from the Irish Volunteers and Sgt Daniel Bailey - one of the few men recruited to the Irish Brigade raised by Casement in German prisoner-of-war camps - came ashore in a dingy.

The Banna Strand ceremony was the biggest State commemoration outside Dublin and the first major one to coincide with the chronological centenary of the Rising.

The wreathlaying ceremony took place with full military honours. The LE Aoife was anchored out in the bay and there was a military flypast.

British ambassador Dominick Chilcott and his German equivalent Matthias Höpfner were both present, as were relatives of Casement and Monteith.

President Michael D Higgins laid a wreath on behalf of the people of Ireland in front of the anchor from German ship the Aud.

The thwarting of the Aud’s attempt to run guns into Ireland for the Volunteers probably scuppered the slim chances of the Rising being a military success.

The Aud was intercepted by the British Navy and was scuttled by its captain, Karl Spindler, off Cork.

President Higgins recalled how the three men had come ashore in the early hours of April 21st, 1916, exhausted after a brutal six-day journey in a German submarine.

Casement, who was suffering from the affects of malaria, was so exhausted on arrival that he took refuge in McKenna’s Fort and was discovered by a policeman that day and arrested.

His grandniece Lesley McNaughton laid a wreath in his honour at the monument near Banna before the State ceremony took place.

The president spoke of Casement’s “idealism, his passionate empathy for the hopeless and the oppressed”.

“Today we take great pride in recalling Roger Casement’s idealism, his courage, his passionate defence of the human dignity of those who were the victims of a brutal world order, and his commitment to the cause of freedom, in Ireland and abroad.”

The president acknowledged that Casement’s role in seeking aid from Germany, when so many Irishmen were fighting against Germany on the Western Front, was contentious, but suggested that we “refrain, at a distance of 100 years, from any simplistic judgement - whether apologetic or condemning”.

“It is important that we endeavour to do justice to the motivations of the actors of the time, and to the manner in which they judged or were induced to seize the opportunities afforded by that wider context to advance a cause they believed was just - however it was to be attained.”

Among those who participated in the ceremony was actor Declan McCarthy, who read from Casement’s speech from the dock before he was sentenced to death for treason.

Special emphasis was laid on the phrase, “loyalty is a sentiment, not a law. It rests on love, not on restraint. The government of Ireland by England rests on restraint, and not on law.”

The service included a rendition of Banna Strand, also known as the Ballad of Roger Casement, by Mike Hanrahan and Breanndan Ó Beaglaoich.

Afterwards, President Higgins visited a new exhibition on Casement at the Kerry County Museum in Tralee.

Casement was hanged in Pentonville Prison, London, on August 3rd, 1916, after being found guilty of treason. His remains were returned to Ireland in 1965.

After years working for Britain’s foreign service and exposing abuses in rubber plantations run by Belgium’s King Leopold II in Congo, he had been knighted.

In 1914 he had exposed similar human rights issues in Brazil. At the same time he was a member of the Irish Volunteers and helped in the Howth gun-running of that year.