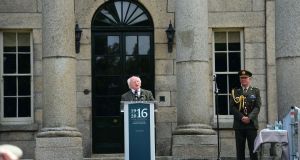 President Michael D Higgins has criticised Irish historical revisionism which sought to link Patrick Pearse with the IRA violence of the 1970s.

He said the attempt to make such a link was based on a “simplistic and ideological assumption”.

Pearse had not been a controversial figure in Ireland up to the 1966 anniversary but his life and legacy had been the subject of “tendentious writings” ever since, the President suggested.

Speaking at a State ceremonial event in honour of Pearse’s contribution to the Irish language on Thursday , the President said “loose revisionism” had sought to suggest that Pearse had provided the ideological template for such violence.

“Contemporary historians are more interested in the human rights breaches, the political and social and economic exclusions that were the basis of conflict as a source of violence in Northerrn Ireland of the 1970s,” he told a gathering at the Pearse Museum in Rathfarnham.

The event was part of An Teanga Bheo one of seven strands of the Ireland 2016 commemoration programme. It included a performance of Aeridheacht : Taking the Air by 35 young performers, aged between 13 and 24, from Tallaght Community Arts Group.

President Higgins praised Pearse as an educationalist. He had sought to raise an awareness of the Irish past, of myths and culture at a time when imperialist presumptions abounded that looked on the Irish as a inferior race.

He cited David Hume’s History off England (1754-62) as an example. “The Irish, from the beginning of time, has been buried in the most profound barbarism and ignorance”.

The President said: “It is important to recognise that cultural degradation that was at the heart of the imperialist project not only in Ireland, but everywhere it has made its violent ingress.”

The president opened a new permanent exhibition at the Pearse Museum. It includes the likely original for Pearse’s famous speech at the grave of Jeremiah O’Donovan Rossa, tea cups from the Pearse household and his handwritten unpublished autobiography.

The president also viewed a new permanent sculpture in the walled garden by the sculpture Stephen Burke. Each line of Pearse’s last poem, The Wayfarer, written the night before he was executed is engraved in a separate stone around a fountain.

“Each line is given a stone,” explained Mr Burke, “so that the cadence and the rhythm and the meter of the lines remains the same as it migrates from paper to stone.”