A father has recorded an apology with a teenager that posted lies about his son on Facebook. Video: Joe Davis 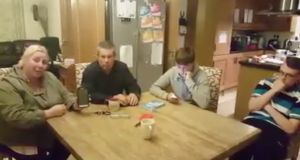 A distraught couple has released a Facebook video about the dangers of social media after their son (16) was targeted in an online prank and got death threats.

The video by Sue and Joe Davis, from Ballivor, Co Meath, has had more than 320,000 views since it went live during the week.

It features the couple and their son Daniel (16), along with another parent and his son, the teen who initially put up a “hoax” post.

In the post, it was wrongly alleged that Daniel Davis had been involved in a break-in and the assault of an elderly woman in Kinnegad on Halloween night and it asked people to report sightings to Trim Garda station.

No such incident ever occurred, Trim gardaí have confirmed.

Speaking at her home on Friday, a visibly shaken Ms Davis said her son had received telephone death threats in the wake of the fraudulent online allegations.

“I wouldn’t let him [Daniel] go to his pre-debs because I was worried sick that if I let him go, and someone had seen the post and didn’t see the second video, he could actually get a . . . hiding off somebody. I wouldn’t let him go and he was very upset.”

She learned of the Facebook post when “I got a phone call from a friend of mine to say, ‘when you turn on your Facebook page there will be a picture of Daniel after breaking into a house in Kinnegad and assaulting a woman’.

She confronted Daniel who told her that the other boy had apologised for the post.

“I rang the dad of the child because he is a good friend. I said, ‘I need you to come around because your son is after putting up a post of my son that is a hoax, but not everybody knows it’s a hoax and he is getting life-threatening [messages]’.”

She later insisted that they make a video to highlight the dangers of such prank posts and alert people to Daniel’s innocence.

In the video, youngsters are strongly warned not to put up prank posts: “My Daniel could commit suicide, likewise the other young fella from the pressure of the situation,” said Ms Davis.

Highlighting the dangers, she said she had seen cases where teenagers were accused of being paedophiles, or that they had sexually transmitted diseases: “Somebody is going to fall the victim of all this.

“Somebody is going to actually – god forbid I hope they don’t – do something either to the person or to themselves.”

Urging parents to check on their children’s social media postings, she said: “Make sure that they sit down with their kids. Make sure that they realise the severity of the situation, what it causes to the person that is actually getting slated and also the child that has done it.”

The experience has been deeply stressful: “I have pains in my lungs. I have a stress like someone is standing on my back constantly.

“ I’m just afraid of my life that he is going to be killed or something. It’s just worry, worry, worry.”

She now wants to share her experience to highlight the dangers of social media.

“I’d like to actually go into all the schools and give them a piece of what’s after happening to my family.

“Social media is brilliant in one way and it’s not in other ways. It has great things that it can give to people, so fast and quick, but it can also take away somebody’s life fairly quick as well.”

Ms Davis described the father of the teen who posted the hoax as a gentleman. He declined to comment.