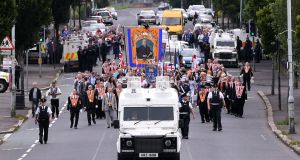 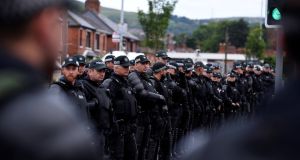 Members of the PSNI positioned near members of the Greater Ardoyne Residents Coalition GARC as they wait for the Twelfth of July Orange Order parade to come down the Crumlin Road in Belfast. Photograph: Clodagh Kilcoyne/Reuters 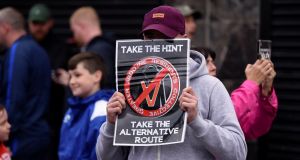 A member of the Greater Ardoyne Residents Coalition GARC expresses his opinion while waiting for the Twelfth of July Orange Order parade to come down the Crumlin Road in Belfast. Photograph: Clodagh Kilcoyne/Reuters 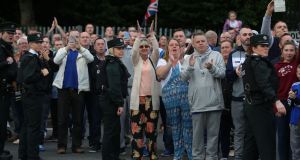 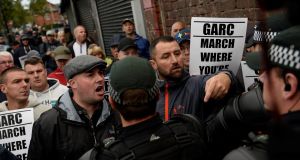 Members of the Greater Ardoyne Residents Coalition (GARC) argue with police ahead of the Orange parade arriving. Photograph: Clodagh Kilcoyne/Reuters 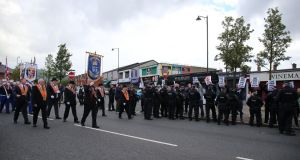 A resolution to one of the longest-running conflicts around parades in Northern Ireland was close, community workers and political leaders said.

Talks between the Orange Order and nationalist residents of the Ardoyne area in Belfast failed in the last few days before the loyalist Twelfth festivities began.

Almost 600 loyal order parades will take place across Northern Ireland on Tuesday to mark the Twelfth of July.

Parades are also being held in Kilkeel, Co Down and Portadown, Co Armagh. The Independent Loyal Orange Institution will hold a parade in Portglenone, Co Antrim.

Loyalists are commemorating the 326th anniversary of King William III’s victory over James II at the Battle of the Boyne in 1690.

Ardoyne has been a byword for violence on the Twelfth of July for many years - a volatile community interface with rioting loyalists or republicans separated by police.

Officers paid the price with injuries such as near-severed ears and fingers from flying masonry or other missiles hurled by angry mobs. A bystander was knocked down by a car driver last year.

This morning’s feeder parade by three Orange lodges attending the main Belfast event was peaceful, but the Orange Order will not be able to return the way it came, past the Ardoyne shops flashpoint.

Sinn Féin North Belfast Stormont Assembly member Gerry Kelly said: “Recently the residents and the Order were very close to a resolution of this very long-running issue around parades and protests and I hope that can be returned to in the near future.

“Certainly I do not want to be standing here for the next five years and I don’t want the next generation to be going through any tension around the parading season.”

Republican protesters in Ardoyne chanted and held slogans proclaiming the loyal order was not welcome during the minutes it took them to pass down the Crumlin Road and past the shop fronts.

A long line of police, riot-ready with body armour but without batons or shields, separated the two.

A drummer with a flute band beat his drum enthusiastically just yards away as he passed. Orangemen in their Twelfth finery looked at the residents without speaking. Some would have been close enough to shake each other’s hands.

The largest and costliest security operation of the day will be rolled out later in Ardoyne. Air support, specialist firearm teams, water cannons and baton rounds will be available if needed.

Marchers and bandsmen will be stopped at police lines in the unionist Woodvale area close to where loyalists have maintained a protest camp at Twaddell Avenue for the past three years.

There was a separate picket from the hardline Greater Ardoyne Residents’ Collective (GARC), which was widely blamed for orchestrating disorder at these events during previous years and has vowed on social media to “mobilise hundreds” again.

“Last night I think was probably the quietest Eleventh Night I can remember, at least in many a year.

“I am happy that we are where we are and I hope that the rest of the day will go off very quietly.”

PSNI assistant chief constable Stephen Martin said the parading season, which runs from Easter to late summer, had got off to a good start with no violence at other contentious marches such as the Tour of the North, Whiterock, the Somme commemoration and Easter events.

“I am hopeful that today will continue in that vein.”

Police, government ministers, clergy and community workers said they hoped calm would prevail throughout today and a flashpoint march in North Belfast passed off without incident.

The acrid smell of smoke from bonfires lit on Monday night by celebrating loyalists still hung in the air in North Belfast today.

Two homes adjacent to the Hopewell Square bonfire in Belfast’s Shankill Road were gutted when a blaze broke out on the roofs of the terrace at around 1am. At least one other house was damaged.

It is thought hot bonfire embers being blown on to the roofs by the wind was responsible.

Today, men in smart dark suits donned orange collarettes or tied union flags on cars, some even using red, white and blue hub caps for the day. Bottles of water were given out to discourage alcohol abuse.

While the vast majority of the Twelfth parades are free of trouble each year, the threat of disorder at a small number of marching flashpoints always has the potential to mar the day.

More than 3,000 police officers are on duty, and there are contingency plans in place to call on support from other UK forces if required.

He said: “There is an acceptance that this is a fairly well rehearsed event.

“Everybody, from the officers on the ground to the community, wants it to go off peacefully.”

The total number of call-outs received by the Northern Ireland Fire & Rescue Service (NIFRS) overnight last night was up on last year.

Of the 123 calls between 9pm and 1am, 42 were bonfire-related. At 16 of those callouts, firefighters had to actively intervene.

The NIFRS said there were no reports of any crews being attacked.

The lighting of the towering bonfires, most built with stacks of wooden pallets, drew thousands of onlookers, but the structures were again the source of controversy, despite the efforts of organisers to improve their image.

To their defenders they make for a family-friendly, spectacular celebration of loyalist/Protestant culture; to their detractors they are potentially dangerous, environmentally damaging, magnets for anti-social behaviour and alienating to nationalists.

There were complaints of the burning of Sinn Féin election posters made for May’s Stormont Assembly poll, as well as the burning of tyres with resultant toxic smoke.

Last year, homes near Chobham Street in east Belfast had to be evacuated over fears that the giant nearby bonfire could topple on to property.