Under plans for the refurbishment of the Seanad chamber in Leinster House, Senators will move to the National Museum’s Ceramics Gallery next door on Kildare Street via a 'secret' door that has been blocked off for many years. Video: Enda O'Dowd 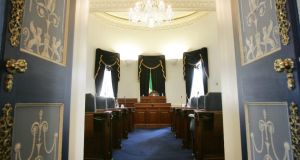 The proposal to relocate the Seanad (above) to the National Museum had previously involved cutting through the walls of the building to create entrances, but this will not now be necessary. File photograph: Alan Betson/The Irish Times

Plans for the refurbishment of Leinster House, and the temporary relocation of the Seanad to the neighbouring National Museum of Ireland - Archaeology, have been submitted to Dublin City Council.

Plans to refurbish Leinster House, including the replacement of old electric wiring, understood to pose a potential fire risk, were put forward almost a decade ago

The Office of Public Works has made two separate planning applications, one for the internal and external restoration of the Georgian building, and a second to permit the use of the museum for Seanad sittings during the work, which is expected to continue until the end of next year.

Plans to refurbish Leinster House, including the replacement of old electric wiring, understood to pose a potential fire risk, were put forward almost a decade ago.

However, the proposal to relocate the Senators during the works caused controversy last year when it was publicly criticised by a former director of the museum, Pat Wallace, who said staff were “weeping” at the prospect.

Heritage body An Taisce subsequently sought a declaration from the city council that the Seanad could not use the museum, unless the OPW secured planning permission for the move. Last December the council decided that the OPW did require planning permission.

The conservation and restoration work to the 1745 building would include rewiring, structural strengthening and fire-compartmentation works, repairs to internal joinery, plasterwork and floors, some internal reconfiguration and redecoration throughout.

External work will also be undertaken, including modifications to ramps and paving to improve accessibility, stone repair and cleaning works to elevations, and roof repairs .

While a final cost for the work has yet to be determined, the OPW last December said it would be at least €8 million.

The proposal to relocate the Seanad to the museum had previously involved cutting through the walls of the building to create entrances and the attachment of a lift to the facade of the museum.

However, the discovery late last year of a “secret door” directly connecting Leinster House to the museum, which had been boarded up in the 1920s, has meant this level of intervention won’t be necessary.

The application to the council seeks to locate the Senators in the Ceramics Room and the Japanese Room of the museum. This will involve the alterations to the doorway between the buildings and a new fire escape door from the museum to an existing external walkway in Leinster House.

The work will also involve the fitting-out of the rooms to function temporarily as the Seanad chamber and the installation of an external air-conditioning unit. All works would be reversed and removed on completion of the conservation and restoration of Leinster House, the OPW said.

An Taisce said it would be carefully reviewing the OPW’s application. A spokeswoman for the museum said it had agreed a memorandum of understanding with the OPW and would not be lodging any objection to the work.