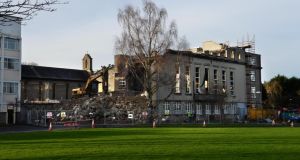 A wing of Muckross Park College, Donnybrook, Dublin, is being demolished. The space is to be redeveloped as a garden. Photograph: Dara Mac Dónaill

Several generations women who were educated at Muckross Park College in Donnybrook, Dublin, are having their memories stirred this week as demolition gets under way on the “concert hall wing” of the old school building.

A new school with modern facilities was built on campus in 2006 and part of the former “old school” was converted into 12 apartments for nuns of the Dominican Order.

The space will now be developed as a garden but Sr Caitríona said the original house fronting Marlborough Road, which is a listed structure, would remain.

According to the morning newspapers of August 1900, the Dominican nuns purchased “the beautiful and spacious grounds known as Muckross Park, Donnybrook with its fine residence” for use as “ a permanent home for St. Mary’s College”.

Before the end of that year Muckross Park was home to primary and secondary schools and a third-level college for women sitting examinations in the Royal University.

Teacher and Irish Times columnist Breda O’Brien, a past pupil, said it was a nostalgic moment.