Prehistoric ornamentation may have been inspired by ‘rolling sun’ phenomenon 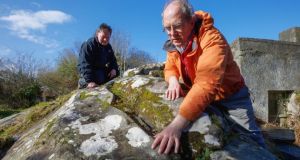 A rare sample of megalithic engraving or “rock-scribing” has been found on an ancient pilgrimage route to Croagh Patrick in Co Mayo.

The prehistoric ornamentation resembles that found in Lough Crew, Co Meath, and is one of just of two rock art samples of its type to be identified west of the Shannon, according to archaeologist Michael Gibbons.

The panel had been concealed behind the outcropping at the Boheh townland known as St Patrick’s chair, which has some 250 petroglyphs or carvings on its surface. The carvings are believed to have been inspired by the “rolling sun” phenomenon, where the setting sun appears to glide down the flank of Croagh Patrick during the months of April and August.

The new panel was found by Michael Moylan of Ardmore, Co Galway and Mr Gibbons during field work they were doing for a series of educational programmes for Connemara Community Radio.

It was revealed after one of several steps constructed around the side of the chair was dislodged, perhaps by animals. The panel has spiral engravings, which are not as weathered as those on the chair due to the shelter afforded by its concealment. Mr Gibbons said that the site dates back about 5,800 years.

“Rock art is more frequent in the southwest, in Donegal and in Wicklow, but is very elusive in the west,” he said. It has been identified at Lochán na Sídhe near Tourmakeady in Co Mayo.

Mr Gibbons and Mr Moylan also found the remains of an ancient village cluster comprising a dozen round houses south of Croagh Patrick and identified a large seaweed farm on the southeast shore of Clew Bay, similar to farms found on the north Clare coast.

On a separate trip to Inis Mór on the Aran islands, Mr Gibbons found evidence of rich soils that once blanketed the karst landscape beneath a stone storm beach on the south of the island.