As views differ over its future, farmer lays claim to Maam Valley’s most famous ruin

As Maureen O'Hara's death focuses minds back on The Quiet Man and Maam Valley’s most famous cottage, the 1952 film trailer shows the building known as White O’Morn Cottage as it was. Video: Argosy Pictures 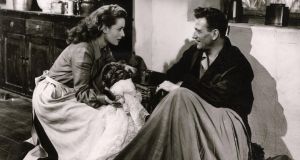 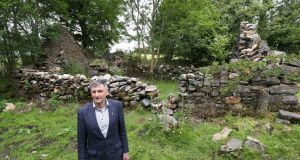 When Seán Ó Tuairisg was a gasúr in short pants at school in Connemara, he was out in the playground when the film crew associated with John Ford’s The Quiet Man drove by.

“I had just started in infants [class] and I remember the convoy slowed down,” the Fianna Fáil councillor says. “They began throwing coins at us from the cars. The older kids got the lolly, as we were shifted quickly back into class.”

Had he all those coins and more, with interest, Ó Tuairisg isn’t too sure it would serve much good in the long-running campaign to have the building known as White O’Morn Cottage restored.

The campaign has several competing strands on social media, with two groups apparently at odds over what should happen to one of the Maam Valley’s most famous ruins in the wake of actor Maureen O’Hara’s death last weekend.

Belfast native Patrick McCormick of the White O’Morn Cottage Foundation says O’Hara had been very attached to the cottage and had discussed its potential rescue with co-star John Wayne shortly before he died.

It was here, at the once neat and whitewashed thatch cottage in the shadow of the Maumturks, that Mary Kate Danaher (played by O’Hara) shared her first kiss with Seán Thornton (Wayne), an Irish-American boxer returning from Pittsburgh steel mining country to his home village of “Inisfree”.

Since O’Hara’s death in the US just over a week ago, there has been a steady stream of cars stopping at the farm gate, which is marked with a handwritten sign and leading to the concrete footbridge over a rushing tributary of the Failmore river.

Only one gable wall of the cottage is almost intact, with much of its stone having been removed by visitors, while ash and holly flourish on its foundations.

The Joyces had built a larger bungalow nearby with the proceeds of the film and that house is itself now derelict.

The property is owned by Canadian and California resident Greg Ebbitt.

More than a decade ago, Paddy Rock, organiser of the 50th anniversary Quiet Man celebration, was among the first to call for some action to be taken, given the tourist potential and the rate at which the building was disappearing.

“Paddy McCormick, a classical guitarist who played at O’Hara’s 80th birthday, was also convinced and has done a lot of work to highlight this,” Rock says.

The cottage is in the Gaeltacht but an attempt by Údarás na Gaeltachta over a decade ago, and more recently by former arts minister Jimmy Deenihan, to engage with Ebbitt on a long-term plan came to nothing, Ó Tuairisg says.

McCormick commissioned an architectural appraisal and worked with Ó Tuairisg and colleagues on a protection order which was also backed by actor Liam Neeson and dancer Michael Flatley. That order is now in place and Galway County Council has confirmed that Ebbitt was contacted and there was no objection.

Tiernakill farmer Pat Keane, whose family runs a nearby guesthouse, has grazed animals in the area and has unofficially maintained access to the cottage.

He has now initiated a claim to the cottage grounds.

“My father, who farmed before me, wasn’t aware that the cottage had been put up for sale by the Joyces when it was purchased by an English buyer,” he says.

“He had a good relationship with the new owner. We looked after him when he broke his arm after he fell off the roof. However, he didn’t tell us when he decided to sell it to Mr Ebbitt. I’d definitely support its restoration – it is a mortal sin to leave it the way it is.”

McCormick says he doesn’t care who owns it, as long as it is restored “sympathetically and authentically”.

A petition on his White O’Morn Cottage Facebook page has attracted thousands of signatures. A rival Save the Quiet Man Cottage campaign, which was unavailable for comment, is understood to have reservations about the protection order.

Spiddal also has close links, he says, as director John Ford was a Feeney from the village and worked closely with Spiddal resident Lord Killanin and hired some of his cast from there.

However, June Beck, of the Maureen O’Hara Magazine in Arizona, says there is something romantic about the ruins.

“Galway County Council did a great job in designating it as protected but perhaps it’s not the place for any big development,” she says.

“Perhaps a commemorative plaque is enough, because there is a magic about it as it is.”