Many lighthouses damaged in storm but still in operation 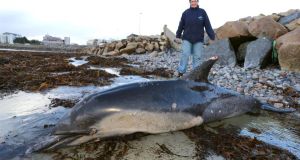 Dr Noreen Burke of the Galway Atlantaquaria, a board director of the Irish Whale and Dolphin Group, with the common dolphin which was washed up on Grattan Road beach during the high tide and winds in Galway city. Photograph: Joe O’Shaughnessy.

Six lighthouses were damaged in the extreme storm force winds and tidal surges that hit the west and south coasts. There were also several mammal strandings include two young dolphins found dead yesterday in inner Galway Bay and Connemara.

A common dolphin was washed onto the steps below Grattan Beach in lower Salthill. Galway Atlantaquaria education and outreach officer Dr Nóirín Burke examined it yesterday.

It was just over 2m long and had no substantial marks. The marine mammal may have become separated from its pod in the heavy swell close to the shoreline, Dr Burke said.

“It’s often very hard to tell the cause of death, but it would seem to be weather-related,” she said. Marine fatalities in this part of Galway Bay are less frequent than on more exposed parts of the west coast.

Another young dolphin was washed ashore yesterday and did not survive at Dog’s Bay close to Roundstone.

Strandings were reported on Mweenish and in Cleggan Bay a week ago, during the sustained series of storms.

The Commissioners of Irish Lights (CIL) – the lighthouse authority – have initiated a helicopter inspection of the coastline from Tuskar Rock in the southeast to Inishtrahull off Donegal, following confirmation that six lighthouses sustained structural damage in the hurricane-force winds and Atlantic swell.

Navigation aids
Worst hit was the light on the Aran island of Inis Oírr, according to Capt Robert McCabe, Irish Lights director of operations and navigation services, who stressed that all aids to navigation were working around the coast.

Windows and windowframes were forced out on Inis Oírr, where sections of the perimeter and compound walls collapsed. Blacksod lighthouse, Co Mayo, was damaged by sea surges.

Damage ranged from flooding to fallen trees, missing roof slates and weather impact on access roads, according to the authority, which has also sent a temporary battery and lantern to Inishbofin, Co Galway.

Ferry sailings
The island’s approach light at Gun Rock, which is vital for its night-time ferry sailings, was swept away early last Friday. The light is owned by the Department of Agriculture, Food and the Marine, but CIL is working with it to provide a temporary solution.

The loss of earnings by inshore fishermen during the current series of storms should be taken into account by the National Co-Ordinating Group for Severe Weather, according to Sinn Féin senator Trevor Ó Clochartaigh.

He has called on Minister for Agriculture, Food and the Marine Simon Coveney to assist those affected.

“Small inshore fishermen have had boats damaged, have lost gear and tackle, while critical infrastructure has been hit,” he said.

“When the farming community was hit by a fodder crisis last year the minister rightly stepped in to put measures in place to help them out.

“The Government had no problem bailing out banks at their time of need. The small fishermen are in need of a bail out now as well.”