Man and dog on 2,000km trek to raise cash for charity 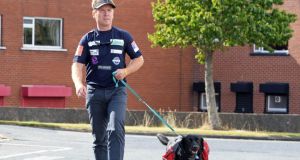 Mark Keating of the Whitewater Foundation with his dog Pajo will trek through five Balkan countries. Photograph: The Irish Times

An Irish businessman and his Labrador dog have been training for a 2,000km walk over mountains to raise funds for charity and to mark his relatives’ role in the first world war.

Mark Keating, who has a background in the water treatment industry, says he will raise money for Our Lady’s Children’s Hospital in Crumlin, Dublin, and the children’s cancer department in Belgrade’s University Hospital during his adventure.

Mr Keating says that he was inspired by the wartime experiences of his great-grandfather and his grandfather-in-law, who was from Serbia.

His wife’s grandfather, Dobrosav Petrovic, survived an event known as the Great Serbian Retreat, when some 240,000 Serbs lost their lives in a march through Albania, after the German, Austro-Hungarian and Bulgarian forces invaded Serbia in late 1915.

Many of the retreating Serbs, including up to 30,000 young boys, were attacked by Albanians, in revenge for atrocities committed several years previously by the Serbian army.

It is estimated that about 155,000 Serbs eventually made it to the Adriatic coast, having experienced cold, hunger, thirst and disease en route through Montenegro and into Albania.

Former British prime minister Winston Churchill wrote in his book The Great War of how the “relentless severity of the Bulgarian pursuit” exposed the retreating Serbian forces to the “worst horrors of war and winter”.

One of those survivors was Dobrosav Petrovic, who caught typhus when he eventually reached Corfu and was left for dead, according to Keating.

“He was about to be buried at sea along with others, but by chance a friend just recognised him and pulled him from his death bed,” said Keating. Petrovic recovered, rejoined his battalion, and was sent to the western front in France.

He was then sent in 1917 to Salonika in Greece, where he fought alongside English and Irish regiments. Coincidentally, one of those Irish was Keating’s own great grandfather, Thomas Frederick Vaughan. Both men were instrumental in helping to push foreign troops out of Serbia in 1918, he notes.

Mr Keating said the great losses that the Connaught rangers, Royal Dublin Fusiliers, Royal Munster Fusiliers and Royal Leinster Regiment experienced at the time has been a “forgotten part of the Irish involvement in the first World War” and he will be visiting areas where more than 1,000 Irish soldiers are buried.