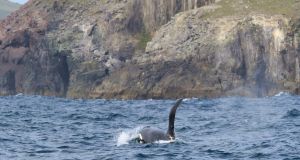 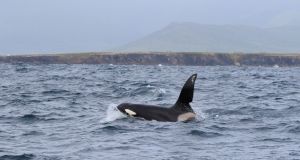 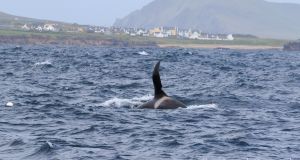 A killer whale has been spotted off the coast of west Kerry. The whale, known as W01 ‘John Coe’ and who is easily recognisable by the large notch on the base of his dorsal fin, was spotted on Monday afternoon in the waters off the Slea Head Peninsula.

The appearance of the killer whale, or Orcinus orcs, follows an early season of sightings off the coast of west Kerry, with as many as eight humpback whales recorded on a single day in mid May as well as appearances from a number of minke whales.

While the appearance of a killer whale in Irish waters is not unheard of, it remains an uncommon occurrence.

John Coe was first photographed off the Scottish Hebrides 33 years ago and has been spotted in Irish waters a handful of times over the past 12 years.

The first time he was seen was in May 2009 off Annagh Head in Co Mayo and since then he has appeared off Co Cork, Co Down, Co Donegal, Co Antrim and Co Kerry.

Before Monday’s sighting, John Coe had been last seen off the coast of Co Mayo in July 2013.

John Coe was already an adult whale when first spotted in 1983 and is considered very old for his species.

In the images taken by local Kerry photographers on Monday it’s noted that John Coe was swimming alone.

He has previously been seen travelling with at least one other member of his pod (family group) and is usually accompanied by a female known as Nicola W03.

The Irish Whale and Dolphin Group (IWDG) has warned of its “grave concerns” for the future of John Coe’s pod whose territory extends into Irish water.

“One major concern is that it is many years since there has been any new additions to this group, and zero recruitment means that this group will ultimately die off; something which would be of great loss to our marine biodiversity,” said the IWDG.

Covid-19: Nine in 10 teachers fear pandemic has damaged mental health of pupils 07:27
Prisons see huge increase in ‘hooch’ seizures during lockdown 02:55
Airport immigration detention facility still not operational 02:53
Ireland among countries urged to consider reinstating restrictions 02:46
‘We feel we are in limbo’: Wedding plans in chaos due to Covid-19 02:05

1 Ireland among countries urged to consider reinstating restrictions
2 Sinn Féin apologises as member resigns over social media abuse
3 ‘We feel we are in limbo’: Wedding plans in chaos due to Covid-19
4 Global Covid-19 cases pass 20m as WHO points to ‘green shoots of hope’
5 Trump evacuated from briefing after shooting near White House
Real news has value SUBSCRIBE