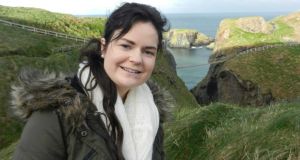 The parents of murdered Cork student Karen Buckley have thanked the people of Scotland for “the huge outpouring of support and sympathy” they received when the search was underway in Glasgow for the missing nurse.

In a statement issued through the Irish Examiner, Mr John Buckley said Scottish people had been very helpful to the family right from the moment they discovered Karen was missing.

“We are very grateful for all the support and messages of sympathy we received from so many people from all over Scotland at this terrible time for our family. We would like to thank everybody in Scotland who helped us in any way.”

He and his wife Marian thanked the Scottish police for their professionalism. He made particular mention of the efforts of Detective Inspector Alan Burton and Sergeants Hannah Naseem and Elaine Carey who travelled to Ireland for Karen’s funeral.

“It was a very kind and thoughtful thing to do. We will never forget the huge outpouring of support and sympathy we got when we were in Scotland, it was incredible.

“We want to thank everybody who took part in the search for Karen and the hundreds of people who turned out for the vigil in George Square. ”

Mr Buckley said like any parents they hoped Karen would have a happy and fruitful life.

“We are extremely upset that Karen will never have the chance to live out her life, travel more and pursue her career in occupational therapy. That maybe someday she could have a family of her own and enjoy a happy and eventful life, which is what she would have wanted.

“We are still in shock and disbelief and it sometimes feels like all of this isn’t real.”

Ms Buckley, a qualified nurse from Mourneabbey, went missing following a night out at the Sanctuary nightclub in Glasgow’s West End on the night of Saturday, April 11th.

The alarm was raised after Karen failed to return to her friends at the nightclub, having told them that she was going to the rest room facilities.

Karen (24) was seen on CCTV leaving the club with Mr Pacteau, and police later traced the courier firm director to his apartment.

Her body was found four days after her disappearance by police at a farm on the outskirts of Glasgow.

Alexander Pacteau, with an address at Dorchester Avenue in Glasgow, has been charged with the murder of the young nurse.

Pacteau is also accused of attempting to defeat the ends of justice.

He made no plea or declaration when he made his second appearance at Glasgow Sheriff Court in April and was remanded in custody.