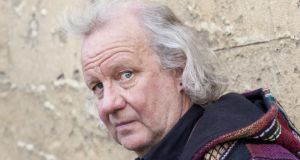 Ed Vulliamy, who who has won awards for his reporting from Bosnia, the 9/11 attacks, Iraq and Mexico. Photograph: David Levenson/Getty Images

Journalism has been “infected” by “corporate public relations” and the media is part of a “seamless troika” involving governments and corporations, according to the British war correspondent Ed Vulliamy.

The Guardian and Observer journalist, who has won awards for his reporting from Bosnia, the 9/11 attacks, Iraq and Mexico, said that resources had been curtailed to the extent that journalists had “shrunk in number” while those working in public relations had grown.

Mr Vulliamy was addressing a discussion hosted by justice and peace group Afri in Carrowteigue, north Mayo, on the media and the Corrib gas project.

Journalists could multiply their media salaries by switching to public relations roles in large corporations, whereas “Truth Plc is not paying the mortgage or children’s fees at private schools”, he said.

He recalled the resources that were more available when he worked for Granada Television’s World in Action series, and said that the career path of Alastair Campbell summed up the changed media landscape.

Mr Campbell had moved from being a Daily Mirror journalist to “justifying a war” as director of communications for British prime minister Tony Blair, he said.


Oil spills
Public relations statements were quoted as if they were “objective truth”, he said, and Amnesty International had identified this in a report it published last November, where it found that Shell had wrongly attributed oil spills to sabotage during official investigations.

Mr Vulliamy said that the equation between objectivity and neutrality was “wrongly combined”, in his opinion, as objectivity was “fact-specific”, while neutrality could result in complicity.

He paid tribute to the community in north Mayo for its fearlessness in voicing its environmental concerns about the Corrib gas project, for its ability to “join the dots” in relation to wider issues, and to film-maker Richie O’Donnell for his documentary The Pipe .

The Corrib gas project, in his view, was “part of the epic narrative of Ireland at a particularly cogent time in the country’s history”.

Journalist William Hederman spoke of a “narrative” created around the project to depict objecting residents as being “backwards”, and recounted specific examples he had recorded of biased or misleading reporting on aspects of the Corrib gas project.


Broadcasting site
Mr O’Donnell, whose Scannáin Inbhear production company live-streamed the seminar, explained how the company was building its own broadcasting site, which would show his new documentary on the handling of Ireland’s natural resources.

He said it would also link up with other north Atlantic communities that have been affected negatively by energy exploration and development.

The discussion can be viewed on http://tinyurl.com/nunreta.