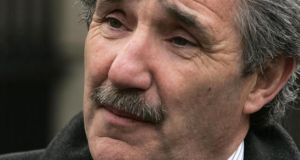 John Halligan: ‘We are talking about people who, in their most desperate moment of life, are being deprived of their humanitarian rights.’ Photographer: Dara Mac Dónaill

He said the Dying with Dignity Bill 2015 would recognise “the right of clearly consenting adults who are enduring intolerable physical suffering to seek medical help to end their lives’’.

Mr Halligan said the Bill was inspired by the battle of “an exceptionally brave Irish woman’’, the late Marie Fleming, who while in the final stages of multiple sclerosis took a landmark challenge to the Supreme Court on Ireland’s legal ban on assisted suicide.

Mr Halligan said that his Bill contained exactly those safeguards, setting out strictly monitored criteria to allow a person in abnormal suffering to choose a dignified, pain-free death surrounded by loved ones rather than continue to endure their excruciating torture with no quality of life. “We are talking about people who, in their most desperate moment of life, are being deprived of their humanitarian rights,’’ he added.

Euthanasia, or assisted suicide, was already legal in Belgium, Luxembourg, the Netherlands and Switzerland, he said, adding that it was an ethical issue Ireland would have to address sooner or later.

Various opinion polls estimated that about seven in 10 people would be in favour of assisted suicide for people suffering with a terminal illness, he said.

The Bill is scheduled to be discussed in Private Member’s time.