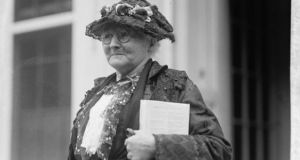 American labour historian, Prof Rosemary Feurer said that Connolly was already well aware of Mother Jones before he went to the US where he lived from 1905 until 1910.

And similarly Big Jim Larkin was also familiar with Mother Jones - once described as the most dangerous woman in America - before he went there in 1914, said Prof Feurer.

“James Connolly, Jim Larkin, and Mother Jones were leading transnational organizers who knew one another and considered themselves part of broad radical workers movement.

“Both men admired Mother Jones and called for an inclusive style of unionism that she helped shape which crossed racial, gender and ethnic barriers and sought to overcome divisions.”

Acording to Prof Feurer, Mother Jones, who was born Mary Harris in Cork, met Connolly in New York and it was to her that he revealed that he was planning to return to Ireland in 1910.

“Connolly and Jones took a similar path, moving from the Socialist Labor Party, the Socialist Party of America and the Industrial Workers of the World so they were often crossing paths.

“They were seeking a way to connect radical social transformation to the workers’ movement,” said Prof Feurer who will speak at the Spirit of Mother Jones Festival in Cork this week.

Prof Feurer believes that both Connolly and Larkin would have taken great pride in the role of Irish diaspora agitators such as Mother Jones where she campaigned against child labour.

“No correspondence exists between Connolly and Jones but she certainly cheered the Irish rebellion, and joined in hopes for a workers republic in Ireland and in the US and the world.

Prof Feurer will deliver a lecture at the Spirit of Mother Jones Festival entitled “Get off Your Knees - Connolly, Larkin and Mother Jones in the Fight for a Global Labour Movement.”

The Spirit of Mother Jones Festival opens in Cork tomorrow and runs until Friday. For further information on the full programme of events, visit www.motherjonescork.com.