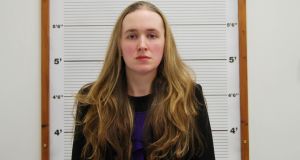 A Northern Irish mother who wanted bring up her children under the Islamic State in Syria has been jailed by a London court for two and a half years.

Muslim convert Lorna Moore (34) was planning to take her three young children to the area, including an 11-month-old baby.

Around the same time, a number of pregnant women from the same community were poised to give birth in the Caliphate.

Ms Moore, Walsall, West Midlands, but originally from the Omagh, Co Tyrone failed to tell authorities her husband Sajid Aslam (34) was about to leave for Syria.

Sentencing at the Old Bailey, Judge Charles Wide described Moore as a “very strong character” and said she “knew perfectly well of your husband’s dedication to terrorism”.

“One of the troubling things about you is your facility for telling lies,” he added.

He said Moore had told “lie after lie” to the jury during her trial and that some of her evidence was “nonsense”. She was sentenced to two years and six months imprisonment.

Ayman Shaukat (28) was also convicted of preparing terrorist acts by helping Aslam and Muslim convert Alex Nash (22) on their way.

Kerry Thomason (24)was pregnant when she was stopped from flying out with her two children to join her husband in Syria.

He described Thomason as “naive” and said her husband made “ugly threats” against her in trying to persuade her to join him.

She was sentenced to two years imprisonment suspended for two years with a supervision order and six-month tagged curfew between 6pm and 6am.

At the time of Aslam’s departure in August 2014, Moore had taken the rest of the family on a Butlin’s holiday in Skegness.

The day after dropping him off at the airport, Shaukat sent a photograph of himself on his mobile phone posing with the IS flag.

As Aslam crossed into Syria, he sent a triumphant coded message back to Shaukat in the form of a video link to a song called ‘I Made It’ by Cash Money Heroes.

Within months, Moore had booked flights to Palma, Majorca, but her final destination was given away in a text from Nash’s pregnant wife in Turkey saying “see you there”.

Moore insisted she would “never” put her children’s lives in danger, adding: “They mean the world to me.”

She claimed her relationship with Aslam ended after he became abusive and they only lived together for the sake of the children who are now aged three, nine and 10.

She told jurors that when she turned to a Muslim cleric for a divorce, he told her that a “white Muslim is not a special Muslim” and she must take her husband back.

Shaukat, of Pargeter Street, Walsall, denied helping his friends join IS by dropping Aslam and Nash off at airports.

The convicted burglar and law degree graduate was nicknamed Karma Chameleon because he presented different versions of himself to jurors and his home in the Caldmore area in Walsall is known locally as Karma.

He described IS as “evil” and said he told MI5 he would “assist in any way I could” after agents contacted him as treasurer of the community group Islam Walsall.

Other members of the West Midlands group allegedly set off for Syria between July and December 2014.

The first to join IS was Muslim convert Jake Petty (25) also known as Abu Yaqoob Britany.

His Christian minister mother Sue Boyce wept as she told jurors how she begged him not to go and later had to identify his body from video footage on social media after he was killed in December 2014.

Petty was swiftly followed by former schoolmate Isaiah Siadatan (24) whose pregnant wife Thomason was prevented from joining him.

He had sent her an email in December 2014 insisting that she should bring their children to him in IS.

Siadatan is believed to have been killed in the summer of 2015, although his death is unconfirmed.

Thomason previously pleaded guilty to assisting her husband in preparation of his terrorist acts.

Nash and his pregnant wife Yousma Jan ( 20) were arrested by Turkish authorities and sent back to the UK.

He took sole responsibility for the plan and admitted preparing acts of terrorism, while a charge against Jan was discontinued.