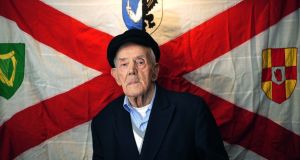 Able Seaman Des Branigan photographed in 2014 at an event to mark the 30th anniversary of the liquidation of Irish Shipping. Photograph: Aidan Crawley

Tributes have been paid to former diver, Irish Shipping veteran and trade unionist Des Branigan who has died at the age of 98.

Mr Branigan, from Dublin, was an honorary president of the Maritime Institute of Ireland.

As a young able seaman, he served on the Irish Poplar, the first vessel acquired by Irish Shipping to maintain a supply line by sea to Ireland during the second world war.

He and his crew mates risked their lives at sea on a daily basis, as Britain had decided it could no longer expose its deep-sea ships transporting goods to and from a neutral state.

On November 16th 1942, 33 of his colleagues died when the Irish Pine was torpedoed and sunk by a submarine in the north Atlantic. The following year, the Irish Oak also sank, fortunately with no casualties.

At a 2014 event to mark the 30th anniversary of the liquidation of Irish Shipping, Mr Branigan recalled meeting then taoiseach Éamon de Valera and minister for supplies Seán Lemass when the Irish Elm arrived into Alexandra Basin in Dublin Port after a three-week voyage with grain from Nova Scotia.

He became an active representative of the Seaman’s Union, and was on the board of the Irish Congress of Trade Unions. He also a keen diver and worked in the late 1960s with the Welsh amateur diver Stanley Wignall to locate the 1588 Armada wreck Santa Maria de la Rosa in Blasket Sound, in Co Kerry.

He helped to negotiate purchase of the mariners’ church in Dun Laoghaire which houses the National Maritime Museum of Ireland, and ran his own company, Marine Research Teo. He supported the community in north Mayo which opposed the Corrib gas project, and presented research on pipeline safety at Bord Pleanala hearings in his early nineties.

Maritime Institute of Ireland president Richard McCormick said Mr Branigan had played a key role in the field of maritime history, and was one of those who was instrumental latterly in securing funding from the Department of the Taoiseach for reconstruction of the mariners’ church.

The newly refurbished Maritime Museum of Ireland was opened by President Michael D Higgins in 2012.