Attempt to stage contest has full support of our two Governments, says McGuinness 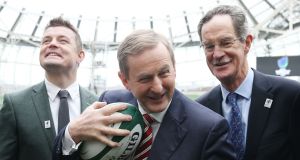 Ireland’s bid to host the 2023 Rugby World Cup, the third-largest global sporting event, was launched on Tuesday with determination and focus, polish and promise, and a sprinkling of audio visual magic delivered in a spine-tingling video narrated by Liam Neeson.

“We’ve discovered the world likes the way we do things,” says the sonorous Ballymena voice. “We’re ready to create something (pause) unforgettable. Ireland! Ready for the world.”

“I like the video,” enthused Taoiseach Enda Kenny. “Ready for the world,” he repeated the phrase, savouring it like a good malt, before reaching for a little philosophy.

“You know, the old saying goes ‘preserve the magic of the past, for the present is the history of the future’,” he said, before adding a tincture of realism: “This is not going to be easy.”

Launching Ireland’s bid to host the 2023 tournament, to be played in nine of 12 stadia identified North and South, it was clear that the year-long lobbying and PR campaign to win rugby’s world governing body over to us, and not either of the two competing bids of France and South Africa, will be fought on several levels.

There’s the practical, the emotional and the geo-political.

“This is phenomenal,” he said. “This is something that has the wholehearted and full support of our two Governments on this island.”

And to reinforce the point, with him was his DUP colleague, Northern Ireland Minister for the Economy Simon Hamilton, who declared it was “an absolute pleasure and a real privilege for me to be able to be here today at the Aviva Stadium to help launch Ireland’s bid for the 2023 Rugby World Cup”, adding that it had been his ambition since a schoolboy to “perform at Lansdowne Road”.

He noted that the Cabinet decision to back the bid (which means underwriting, with the Northern Ireland Executive, the upfront tournament fee of £120 million) was the speediest rubber stamping he has witnessed since entering government.

Apart from the Neeson-narrated video, the Bid Oversight Board, which is chaired by former international Dick Spring (and includes bid ambassador Brian O’Driscoll, rugby luminaries from North and South, and GAA director general Páraic Duffy) has produced a high-quality, 60-page brochure.

With big pictures and few words, it sells Ireland as a venue – in feel-good, fun-loving sports nation terms but also for the facilities .

The bid details the available stadia, which have a mix of seating and standing, and from which the final nine that will actually host matches will be chosen, should Ireland’s bid succeed.

It extols the island’s transport infrastructure and hospitality sector (the expected 445,000 overseas visitors will require an estimated 2.67 million bed nights for the duration of their stay).

“Ireland is ready for the world, in every sense,” said Spring. “Our sense of fun, friendship and welcome will create a truly memorable experience for everyone including, we predict, the greatest number of travelling fans that rugby world cup has ever seen.”

But, as Mr Kenny noted, in the wake of staging other successful large-scale sporting events such as the Ryder Cup, of Ireland’s growing stature in world rugby, and of filling a stadium in Chicago and beating the rugby world champions, “It is about personality. It’s about people. It’s about enjoyment . . . I really am excited about this.”

If the decision comes Ireland’s way, he wondered “what it will mean for the people?”

“Pride in their hearts,” he answered, slapping his palm on to his chest, “and when that whistle blows and when those 28 [members of World Rugby’s governing body] vote, I want to see just one word tumbling out of that box – Ireland! – and then we can stand shoulder to shoulder and show them what we can do.”

For ambassador O’Driscoll, its about winning – the bid and the cup.

“One prize, one goal and everyone giving it their all,” he said.