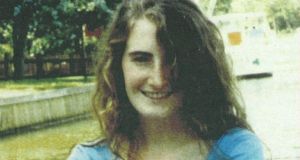 A claim that a member of the Provisional IRA may have killed American student Annie McCarrick, who disappeared in 1993, has been made in a new book.

Retired detective sergeant Alan Bailey, who was national co-ordinator of Operation Trace, is author of Missing, Presumed the latest book to look at the cases of women who have gone missing in Ireland in the last number of decades.

He told RTÉ’s Today with Sean O’Rourke programme that the American student met the IRA man, to whom he gave a fictional name Manus Dunne, at Johnnie Fox’s pub in Glencullen in the Dublin mountains.

He said the information from a “very reliable source”, was a story that “needs to be checked out”.

Mr Bailey said the IRA member was part of an active service unit at the time, responsible for shootings and punishment beatings in west Belfast.

He was believed to be in a safe house in the Rathfarnham Tallaght area of Dublin having fallen foul of an IRA member, higher in the hierarchy.

He went to Johnnie Fox’s that night in March 1993 where he met Ms McCarrick and during the evening he “started bragging about different exploits”, Mr Bailey said.

He began naming names and naming colleagues and then “he realised the enormity of what he’d done and it sealed her fate”.

He offered a lift into town but “drove her up the mountains where he killed her and concealed her body behind some bushes”.

When he went back to the safe house he told his colleagues he believed she was a spy and the following morning two cards went out, one to take her body and the other to run interference in case gardaí were following.

Her body was then concealed in the mountains.

Later that year ‘Manus Dunne’ was moved to the US after he sexually abused the child of another IRA member.

Both were “high up in the organisation” and a split in the IRA was feared “if one or other was taken out”.

It was decided to send the perpetrator to the US where he got a job in a bar. This happened later the same year that Ms McCarrick died.

Mr Bailey said the story needed to be checked out, the information came to light in 2009/2010 but Operation Trace, had effectively been wound down in 2002.