Some 200 students and teachers demonstrate over English language school closures

Some 200 students and teachers demonstrate in Dublin, calling for tighter regulation from the Government after the closure of 14 private English language schools. Sorcha Pollak reports. 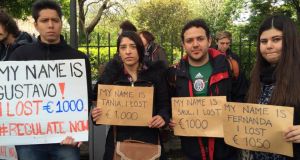 Students who lost money due to the closure of English language schools in Dublin take part in a protest. Photograph: Sorcha Pollak 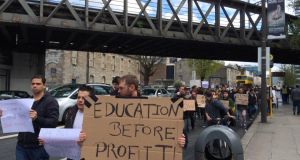 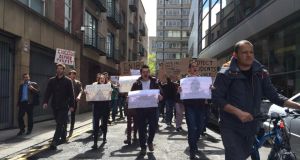 Some 200 international students took to the streets of Dublin on Tuesday protesting the recent closure of 14 private English language schools around the State and calling for tighter regulation from the Government.

Chanting slogans like “more regulation for better education” and “what do we want, education, what do we get, exploitation,” Brazilian, Mexican, Venezuelan and Malaysian students marched from Merrion Square, past the office of Quality and Qualifications Ireland (QQI) and the Garda National Immigration Bureau, ending up outside Dáil Éireann.

The protest was organised by Ciara Lane who taught English at the Modern Education Centre (MEC) in Dublin up until the school closed its doors a few weeks ago.

Ms Lane said students and teachers were calling on the Taoiseach and ministers to implement “learner protection insurance” and more rigorous inspections of schools.

“We’ve seen 14 English language schools close in Dublin as a result of a huge lack of regulation within the industry,” she said, adding that protesters planned to send leaflets to the Government detailing the amount of money students had lost through school closures.

“When you think about how many international students we have coming here, they contribute hundreds of millions of euro into our economy. But, would you recommend for your family and friends to come visit when your school has closed its doors and stolen your money?”

Protesters’ calls for regulation follow reports that the International Education Academy in Dublin is set to close its doors, leaving students €200,000 out of pocket collectively. These include nearly 100 prospective students in Brazil who had already paid registration fees of €2,000 each before the closure.

Ignacio Valdes (28) from Mexico says he paid €1,350 for six months of English classes at the MEC in Dublin. However, he only got through two months of the course before the school decided to close.

“The school said it had no money, that’s the reason we’re closing, but there’s more than 500 students who paid the same as me so there’s a lot of money coming into that school.

“When we came here, we realised it was almost like a lie. People sell schools with all the promotions and when we get here we don’t have anything.”

“If you want to show your country is a good country to come to, you need to support the people who come in.”

Pádraig Walsh, chief executive of QQI, told protestors many of the schools that had closed had been operating in the State without meeting the standards set under the Accreditation and Coordination of English Languages Services (Acels) process.

Mr Walsh said he expected the regulatory reforms for schools recruiting students from outside the European Economic Area (EEA), which were due to come into effect in January, would be introduced “very shortly”.

“As Acels is a voluntary scheme, English language schools can operate in Ireland without having Acels recognition,” he said. “It’s clear that tighter regulations are needed... and that’s fully the intention of the ministers for justice and education.”