HSE to unilaterally cut prices it pays for drugs 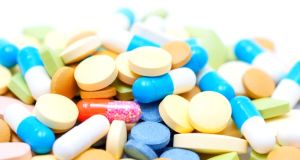 The HSE in its service plan for the year had envisaged generating savings of €110 million this year on drug costs. Photograph: iStock

The Health Service Executive is to unilaterally reduce the amount it pays for drugs and medicines .

Minister for Health Simon Harris has told the HSE to cut drug prices following the failure of talks between the State and pharmaceutical companies to reach agreement on price reductions.

“It did not prove possible in the negotiations to reach an agreement that would deliver on the State’s objectives,” a spokesman for Mr Harris said.

As well as saving money by cutting the State’s overall drugs bill, the Government needs to make funds available for new treatments, many of them hugely expensive, for the coming years.

Mr Harris told the Cabinet on Tuesday of plans for the HSE to invoke legislation that was put in place in 2013 to allow it to change the reimbursement price it pays for drugs and medicines.

The Minister’s spokesman said it was now up to the HSE to determine the reimbursement prices paid for medicines, using its powers under the Health (Pricing and Supply of Medical Goods) Act 2013.

“While progress has been made in reducing the cost of medicines in recent years, the price paid for medicines in Ireland remain at the high end of the European spectrum,” he said.

Informed sources said the scale of the reductions planned would be considered on a “drug-by-drug” basis. The HSE in its service plan for the year had envisaged generating savings of €110 million this year on drug costs.

Sources said the HSE sought to invoke the legislation as adequate savings were not secured in talks between the Department of Health, the Department of Public Expenditure and the pharmaceutical industry which commenced in March.

Once the HSE informs the industry in writing of the planned reductions , there will be a 12-week waiting period before the new lower prices come into effect.

Government sources said it was hoped the initiative could lead to further negotiations with the sector and an agreed deal on lower prices.

One source said: “We know Irish patients are paying significantly more for drugs, we know that drug prices are set to rise by around €100 million per year at a time people are rightly clamouring for the health budget to be managed and for resources to be made available for investment in new drugs. It would be irresponsible for the HSE not to try to contain prices.

“There are new drugs coming down the tracks, such as Orkambi (for cystic fibrosis) and so on, that patients will rightly be seeking. When you take wages and staff costs out, drugs are a huge part of the health budget. About €1.7 billion was spent by the Government on drugs in 2015.

“ Once these letters are issued by the HSE to the industry, there is a 12 week period before the new price kicks-in. Government sources would hope that would bring people back to the table to try to come-up with a better price.”

“The preferred outcome for the State was to negotiate, it’s a very big sector in the Irish economy but at the same time the onus is on us to achieve savings. The HSE service plan commits to €110 million worth of drugs savings this year. We are still paying way more for drugs than many other European countries; Belgium, Finland, France. so one would hope this would encourage further negotiation.”