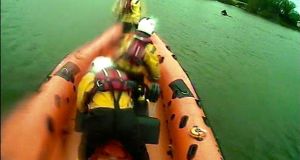 Lough Derg RNLI go to assist a horse stranded in flood water. A bucket of oats was used to coax the animal in.

A young horse which slipped into a flooded river on New Year’s Day has been rescued from Lough Derg by the RNLI lifeboat.

The animal was spotted struggling in the Nenagh river shortly after midday on Friday and Valentia Coast Guard asked the Lough Derg RNLI inshore lifeboat to launch.

When the frightened animal attempted to swim further out, the two crewmen waded into the water, holding a towline between them, to edge it back in to the shallows.

A bucket of oats was used onshore to coax the animal in. The young horse had wounds to its chest and knee, and a vet was called by Valentia Coast Guard to assist.

Winds were south-easterly, force two to three, with very good visibility, according to Ms Hooker, who said that the horse was then enclosed in a field “with some difficulty”.

As river levels continue to rise across the midlands and west, Galway County Council worked with the local community in Kinvara yesterday (fri) to try and relieve some of the flood pressure by clearing a channel towards the coast.

Flood water has continued to surge underground and overground from the Slieve Aughty mountains to the sea, via Thoor Ballylee, Coole Park, Ballinderreen and Kinvara.

Some 12 houses in the south Galway area are now flooded, and up to 40 homes are cut off - with a number of families now staying with relatives. Five families are being accommodated in Gort by Galway County Council.

Galway County Council director of services Liam Gavin said that the emergency works to clear the channel at Kinvara had been authorised by the local authority, and local JCBs were being used to try and relieve the situation.

He said that three to four houses in Eyrecourt/Meelick area were now vulnerable as the Shannon was still rising, and routes in this area were also affected.

Mr Gavin said it could take several weeks for levels to drop, and this could be exacerbated by extra rain forecast.