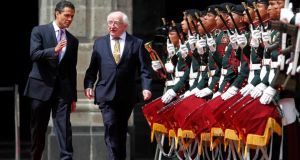 President Michael D Higgins has invited his Mexican counterpart Enrique Peña Nieto to a return visit to Ireland to develop ties with Mexico as “a key global partner for Ireland, now and in the future”.

Speaking after meeting Mr Peña Nieto at Mexico’s national palace, Mr Higgins said Ireland looked forward to deepening Ireland’s business ties with Mexico and a long-standing cultural relationship beyond the 40th anniversary of diplomatic relations between the two countries in 2015.

Referring to Ireland as a “gateway” for trade, the Mexican president acknowledged the invite from Mr Higgins to visit Ireland on the occasion of the anniversary of official relations between the countries.

Mr Higgins said in his speech that he was “very struck by the energy and dynamism” in Mexico and admired its ambitions for sustainable development and economic growth while “prioritising social inclusion”.

Earlier, the president laid a wreath at the Altar of the Nation in Chapultepec Park in Mexico City commemorating where teenage Mexican soldiers jumped to their deaths in 1847 rather than surrender in the Mexican-American war.

At the ceremony at the national palace, the presidents witnessed the signing of a joint agreement by Minister of State for Foreign Affairs and Trade Joe Costello and Mexican foreign minister Jose Antonio Meade setting out how Ireland and Mexico will develop partnerships between Irish and Mexican companies and universities.

Mr Higgins said that during his meeting with the Mexican president he discussed developments in Europe and the international economic situation. Ireland’s economic recovery was supported by the country’s attractiveness to investment, he said.

“Ireland, though affected severely by the recession that hit parts of the world, is now emerging from the worst of the crisis,” the Irish President said in remarks after meeting President Peña Nieto.

“We are set on a course of sustainable growth, based on a real economic performance, which actively address the European wide problem of unemployment.”

Mr Higgins said that he recognised that Ireland’s future lies in “ensuring that our economy is built on a sustainable model, nurturing talented and highly educated people”.

It would also involve “creating quality goods and services, innovating and connecting to global partners, customers and investors in enduring ways, and pursuing all of those objectives at home and abroad in an inclusive way”, he said.

The President said that Ireland had much to learn from “new discourses” emerging from Mexico and other parts of Latin America, which are “rich in possibilities for new paradigms of thought, policy initiatives and ethnical responses to the challenges facing our shared vulnerable planet”.

One of the objectives of the President’s 12-day Central American tour of Mexico, El Salvador and Costa Rica is to promote trade ties with these countries and to encourage investment into Ireland.

Mexico is Ireland’s 19th largest trading partner. Ireland records more than €1 billion worth of trade with the Central American country every year.

Among the Irish companies and universities signing agreements at a ceremony witnessed by the two presidents at the national palace were VivaAerobus, the low-cost Mexican airline backed by Ryanair founder Declan Ryan which is announcing the purchase of new Airbus A320 aircraft this week. Mr Ryan attended the ceremony.

Northern Irish company Randox also signed an agreement with a Mexican company that is expected to generate more than $8 million (€5.85 million) of new business over two years and create 30 new jobs in Donegal.

Dublin supplier of stainless steel kitchen equipment H&K Ireland signed an agreement to expand their Mexico business, which will lead to the creation of at least 125 jobs.

One of the Irish-Mexican academic partnerships agreed at the ceremony was a letter of understanding between Dublin City University and the Tec de Monterrey, which has more than 25 campuses and 90,000 students in Mexico.

A collaboration agreement was also signed between the Digital Skills Academy in Ireland and ITESCO, the Jesuit University of Guadalajara.

Mr Higgins will speak at the Mexico Business Summit in Guadalajara - known as the Davos of Latin America - tomorrow, where 20 Irish companies will be represented. He will be the first European head of state or government to attend the high-profile business conference.

1 Donegal to move to Level 3 Covid-19 restrictions, Taoiseach confirms
2 Covid-19: Three more deaths and 324 new cases in State as ‘green list’ of countries reduced
3 Next 10 days critical in fight against Covid-19 in Cork, says advisor
4 People leaving Catholic church because they are tired of ‘little old men’ - McAleese
5 Covid-19 Q&A: How are we doing now and is there any good news?
Real news has value SUBSCRIBE