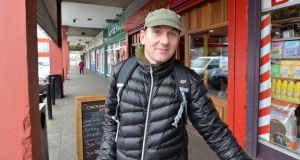 Gino Kenny has been pushing for the legalisation of medical cannabis. Photograph: Alan Betson

The Oireachtas Health committee has voted to reject People Before Profit TD Gino Kenny’s Bill to legalise medical cannabis and said the Bill “should not proceed to committee stage”.

The report by the committee on the proposals says the Bill has major legal issues and the proposed framework to allow patients access cannabis for medical reasons is “too loose to effectively guard against leakage of supply to recreational users, [AND]overuse by patients”.

The Oireachtas health committee scrutiny report outlines it is “concerned that the Bill proposes to remove cannabis from the Misuse of Drugs Act 1977”, which the report warns may have the effect of decriminalising cannabis use for all users.

The report states “this seems in conflict with the intention of the Bill which is to make cannabis available specifically for medicinal use as expressed in the title of the Bill. It is the view of the committee that this is not a safe course of action.”

Mr Kenny put forward the Bill, which was passed by the Dáil without opposition from the Government, in December.

The committee’s scrutiny report argues there is still a shortage of scientific peer-reviewed evidence on the safety and effectiveness of cannabinoid treatments for medical conditions, despite initial encouraging medicinal possibilities.

Fine Gael TD Kate O’Connell said there are aspects of the Bill that caused the committee huge concern insisting it was more about decriminalising the use of cannabis.

She said: “When we authorise medicines we need to make sure they are of a high quality, are safe and are effective - and that their effects are measurable and quantifiable.

“As such, you could say that this was an opportunity lost to make cannabis widely available as a medicinal product.

Ms O’Connell added: “Our primary role as legislators is to safeguard the public. I believe today’s report does just that.”