Halawa family call for public support to get brother released 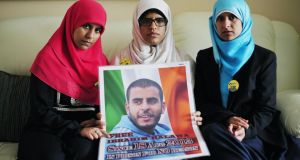 Omaima, Fatima and Somaia Halawa, sisters of Ibrahim Halawa, who is currently in prison in Egypt. Mr Halawa is to go on trial in Egypt on Sunday, along with 493 others who were caught up in violent protests in Cairo against the authorities. Photograph: Aidan Crawley

The family of Ibrahim Halawa has called on Taoiseach Enda Kenny to intervene and have him released from jail in Egypt.

Mr Halawa (19) goes on trial on Sunday along with 493 others who were caught up in violent protests in Cairo against the Egyptian authorities, who had deposed president Mohamed Morsi.

He was arrested along with three of his sisters on August 17th, 2013, and has been in Egyptian custody since. His three sisters have been released.

A new trial has been scheduled to start on March 29th after numerous postponements. If convicted he could face the death penalty.

The Halawas say the Irish Government has not done enough to secure his release. Mr Halawa’s sister, Somaia Halawa, said the family have already had two meetings with the Minister for Foreign Affairs Charlie Flanagan.

Ms Halawa said whatever pressure the Irish Government had brought to bear to date has not worked.

“I think at this stage, especially after 600 days behind bars, it is time for Enda Kenny to put more pressure on the Egyptian government to have Ibrahim released,” she said.

Socialist Party TD Ruth Coppinger said the “lacklustre response” from the Irish Government was very worrying and she questioned whether or not the Government would have done more if Ibrahim Halawa was white.

“It does raise [questions about the] commitment [of] the Government to the new Irish.

“He’s as Irish as any young boy. If this was a white person from Ballyhaunis would the Government be more active?”

Sinn Féin MEP Lynn Boylan described Ibrahim Halawa as an “Irish-speaking, GAA-playing Dublin lad”. She asked whether the Government would do more if Mr Halawa’s name was “Paddy Murphy”.

“He cannot have a fair trial. If it was Charlie Flanagan’s son, would he be calling for a fair trial or for his immediate release?”

A statement from the Department of Foreign Affairs (DFA) refuted any suggestion that the Government was not doing enough to have Mr Halawa freed from jail.

The DFA said that Mr Flanagan had continually called for Mr Halawa to be released and had raised the issue with both the EU High Representative for Foreign Affairs Federica Mogherini and her predecessor Catherine Ashton.

“Minister Flanagan has raised this matter with his counterpart, Foreign Minister Shoukry, on numerous occasions, both in face-to-face meetings and in phone calls,” the DFA said.

“The Minister has continuously asked that the charges against Ibrahim Halawa be reviewed, and that he be released and permitted to return home to Ireland. This month, the Minister held a meeting with assistant foreign minister Hisham Badr.

“At each of these meetings, the Minister has called for a review of Ibrahim Halawa’s case, his release and his return to his family and his studies. The Egyptian government is well aware of Ireland’s position.”

The DFA also said that there was ongoing communication with the Egyptian authorities to get Ibrahim Halawa released under a presidential decree.

“The Embassy of Ireland in Cairo has been in sustained and direct contact with the Egyptian authorities in relation to the case, and contacts have included numerous meetings at ambassadorial level with senior officials from the foreign ministry, ministry of justice, and the office of the prosecutor general,” the statement said.

The DFA concluded by stating that embassy officials had visited Mr Halawa on more than 30 occasions, including this week.

“Officials from the embassy will attend Mr Halawa’s hearing on Sunday. The department is taking, and will continue to take, all appropriate action to seek a review of Ibrahim Halawa’s case, his release and return to his family.

“In the meantime, we will continue to provide all possible consular assistance to Ibrahim and his family.”

The mass trial, in which Mr Halawa is due to be involved, has been postponed four times already.

Fatima Halawa said her brother has been moved to the Wadi el-Natrun prison, where torture is alleged to take place.

A protest is being organised for outside the Department of Foreign Affairs, Iveagh House, St Stephen’s Green, at 2pm on Saturday.