Greyhound racing told to clean up its act 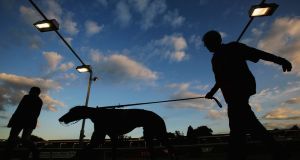 Describing it as “an industry in pain”, Senator Denis Landy said there had been a serious decline in the numbers attending events and Bord na gCon was “€20 million in debt”. Photograph: Gety Images

Greyhound racing, which has seen sharp falls in the number of people attending meetings, must counter its image for dishonesty, according to an Oireachtas report.

Owners and trainers were found “openly admitting to doping dogs” in BBC and Channel 4 documentaries, Kilkenny-based Senator Pat O’Neill said at the launch of a report into the industry.

“The industry has got to change its image,” said Mr O’Neill, adding that admissions of drug use in the industry was internationally damaging both to itself and to Ireland.

Insisting that it was “a great, old industry that can be great again”, Senator Brian Ó Domhnaill said there were “issues of corporate governance” and that owners and breeders were not being given a voice.

Describing it as “an industry in pain”, Tipperary-based Senator Denis Landy said there had been a serious decline in the numbers of people attending events and Bord na gCon (the Irish Greyhound Board) was “€20 million in debt”.

Any additional funding supplied by the exchequer should be ringfenced as prize money or other incentives, but not used for debt-servicing

That a zero tolerance policy was vital on the issue of prohibited substances.

Mr Doyle also said that a previous report commissioned by the Department of Agriculture from Indecon Consultants should be revisited on a regular basis.

This was particularly important as it appeared that there were still “ongoing issues concerning the breeding of greyhounds with dogs which were [certified as] dead for two years or more.

The full report of the committee is available on the Oireachtas.ie website.