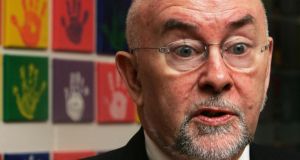 Minister for Education Ruairí Quinn would be allowed, under emergency legislation, to unilaterally change conditions for ASTI members.

The Government is insisting that there will be no renegotiation of the Haddington Road agreement on public service pay despite the decision of the secondary teachers’ union ASTI to reject the deal and to vote for industrial action.

The standing committee of the 17,000-strong union is to meet on Monday to consider the nature of any action in the wake of the ballot result. However, disruption in secondary schools is likely before Christmas.

The decision by the Teachers’ Union of Ireland to back the Haddington Road agreement in a ballot which also ended yesterday leaves the ASTI in an isolated position, given that primary teachers have already accepted the deal.

The ASTI will consider a variety of possible forms of industrial action up to and including strikes. However, it was expected that, initially at least, it could opt to stop working the 33 additional hours a year that were agreed under the original Croke Park agreement.

Government sources believe that any renegotiation of the deal to try bring the ASTI on board could lead to the whole agreement unravelling because other groups would inevitably seek to unpick elements that they find unpalatable.

Terms imposed
As a result of the ASTI rejection, the Government is now expected to impose the terms of financial emergency legislation on the union’s members.

This means that pay cuts for those earning between €65,000 and €100,000 imposed in July would remain in place permanently for ASTI members while others in the public service will see them reversed by 2018.

An increment freeze would also remain in place for three years.

Other groups will receive their first increment due after accepting Haddington Road, with the payment of others delayed for a period.

The Government has previously indicated that unions that rejected the Haddington Road agreement would not enjoy the deal’s protections against compulsory redundancies.

The different outcomes in the ASTI and TUI ballots will cause significant administrative difficulties for education authorities, which face having to distinguish the members of one union from another working in the same schools in applying pay rates.

It is likely that the TUI will be asked to supply lists of its members to allow for the payment of increments.