Give Me a Crash Course In . . . stock-market falls

If growth slows internationally it will hit growth here eventually. So take election promises to cut taxes, increase pensions and lower the cost of childcare with a pinch of salt 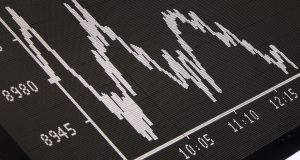 Stock markets are up, then they are down. Should I really care?

A lot of the time, probably not. It's just that since the start of the year there have been a lot more downs than ups. And sometimes, although not always, market moves have a real impact on economies and on people’s finances.

At the start of the year everyone was worrying about China and about the impact of slower growth there. China is a huge manufacturer and the second-largest economy in the world, so fears about growth there helped to send oil prices tumbling, along with the price of commodities such as iron and copper.

But concern has spread since then. Now there are also worries about growth in Europe and in the United States. If growth slows then companies make less profit, so their shares aren’t worth as much.

And didn’t I hear fears about banks again? Are we back in 2008 or what?

There are some echoes of those terrible times, all right, although nobody thinks we are heading back into some kind of megacrisis.

The worry is, first, that nasty surprises may be lurking in the balance sheets of some of the big European banks. Have they lent a lot of money to energy companies that might go bust, for example?

There is also the fear that low interest rates will hurt bank profits, as banks find it hard to have a decent gap between the cost they raise money at and the cost they lend it on at when rates are very low. (Irish banks manage better than most here, by charging high interest on standard variable-rate mortgages.)

There is also the problem that finance is so darn complicated that investors are worried there is something out there that they just don’t expect. When the boss of Deutsche Bank and the German finance minister both have to come out and say everything at the bank is okay, then you know that nerves are on edge.

Where will it all end?

Who knows? The market is split between those who say that a big fall in share prices has been coming for a while and those who say that, although the world economy faces challenges, things are generally okay. The current bout of market upheaval has gone on for an unusually long time, however, and is starting to spook investors and business leaders across the world.

Can’t central banks do something?

This is one of the key worries. Central banks have already fired so many shots that their armoury is nearly empty. The European Central Bank is buying billions in government bonds each week to try to pump cash into moribund economies and get inflation going. The US central bank, the Federal Reserve, raised rates by a quarter point, to 0.25 per cent, before Christmas and is now wondering if it can move again.

Just this week the Swedish central bank cut one of its key rates to minus 0.5 per cent. That means banks have to pay it money to deposit their funds there. If that sounds very weird, it is because it is. Central banks can always do a bit, but bar printing money and sending it out to people their scope for dramatic action is limited.

And what about my pocket?

If growth slows internationally it will hit growth here eventually. You should take the election promises to cut taxes, increase pensions and lower the cost of childcare with a pinch of salt. If growth here were, say, 2 per cent over the next few years rather than 3.5 to 4 per cent the result would be noticeably different.

If you are a borrower then interest rates should remain low, and fixed-rate offers should be attractive in some cases. Party time continues for those on tracker mortgages. Savers will continue to get half nothing in interest. And as for your pension fund – well, we’re all going to be working until we’re 70 anyway.