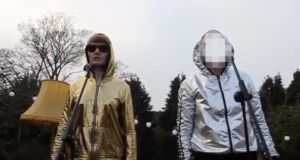 Screengrab from ‘Pixel’s entry for a wedding competition on Newstalk. The teacher had to obscure her face in the video to protect her career.

“We’re totally overwhelmed by the support! It’s a fairytale ending!” Pixel, the gay teacher who had to pixelate her face for a Newstalk lipsyncing competition, has, with her partner Caoimhe Hickey, won a €20,000 wedding and honeymoon package, beating hundreds of other contenders.

The competition drew controversy when Pixel, out of concern for her students and colleagues, chose to pixelate her face in her video entry. Under Section 37 of the Employment Equality Act, she could be prevented from career progression or transfer as a result of her sexual orientation, given that she teaches in a Catholic school.

“We’re not constrained now - we can invite everybody. Everybody is so happy for us - friends, family and colleagues. We can have food and wine and a band - whatever we want!”

The victory comes after Minister of State Aodhán Ó Ríordáin said that people should be “horrified” to live in a country where a person had to pixelate their face to avoid discrimination.

Under Section 37, an employee of a school or hospital who does not “uphold the ethos” of the institution can be barred from permanent employment and promotion. Mr Ó Ríordáin has pledged to change the act by Easter.

Pixel and Caoimhe suffered a backlash in the final days of voting from social media commentators who alleged that they were deliberately highlighting employment inequality in their video. “That was never our intention,” said Pixel.

The ceremony itself won’t be a white wedding. Pixel plans to wear a silver leather dress with a space age collar, although she isn’t sure what Caoimhe is wearing yet. The venue has yet to be decided.

“We couldn’t have afforded a wedding. So many times we sat down to plan it and realised we couldn’t invite many people.”

Pixel and Caoimhe will be celebrating their win in Pantibar, with friends and supporters.