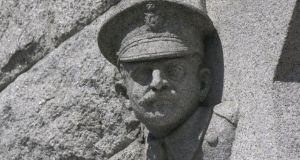 One of the stone heads of Dublin Metropolitan policemen on Pearse Street Garda station, Dublin

The Garda Historical Society is inviting members of the public to bring artefacts associated with Ireland’s earliest police forces to Dublin Castle next Saturday.

The society, a non-profit organisation that aims to bring the history and traditions of Irish policing into the public arena, is looking for old photographs and documents from as far back as the founding of the earliest forces in the 1830s.

“We’re trying to gather all the information that’s in people’s attics, shoe boxes and china cabinets,” said Sgt Paul Maher of the society. “Photographs, artefacts, old police notebooks, things they may have lying around the house belonging to their granddad or great-granddad who was in the Royal Irish Constabulary, the Dublin Metropolitan Police or the first guards.”

Oral histories
Members of the force will also record oral histories on the day. “If it’s your granddad, we want to talk to you about the person he was, where he worked and what he did.”

“We’re not asking people to donate, it’s their property, we just want to talk about the artefacts they have.”

Existing items held by the society include a notebook from a member of the Dublin Metropolitan Police that records his activities from 1864 to 1868. “He was a mounted policeman who worked through the Fenian revolution of 1867. We find him moving munitions all around the city, so you can really feel the military build-up for what’s about to take place,” Sgt Maher said.

Leopold Bloom
The archive also holds an 1894 photograph of Henry Flower, an inspiration for the James Joyce character Leopold Bloom. “He was charged with the murder of a young lady and was later acquitted.”

The society also has a photo of Ned Broy and Davy Neligan, members of police who were informants for Michael Collins.

Taking place from 10am to 6pm at Bedford Tower in Dublin Castle on Saturday, November 16th, the event includes a free talk at 2pm on “The Theft of the Irish Crown Jewels”.

“These were the Lord Lieutenant’s jewels. They were taken in 1907 from the very room where this talk takes place and were never recovered,” Sgt Maher said.

Other free talks include “The Lockout”, at noon, and “Spying on Ireland – the intelligence services during WWII”, at 4pm.