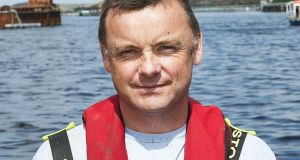 Mussel farmer Marty Nee, who was killed in a diving accident in Galway.

A Connemara mussel farmer has died following a diving incident over the weekend.

Marty Nee, of Lettergesh West near Renvyle, was diving in the Killary fjord on Saturday evening when he got into difficulties.

Mr Nee, a father in his early 40s, started a mussel farm with his wife Catherine in Killary in 2000, harvesting the first crop in 2001.

The rope-grown mussels are exported to Europe, and the company is one of the main suppliers for the annual Connemara Mussel Festival on the May bank holiday weekend.

Mr Nee was a leading figure in the Irish shellfish industry, and colleagues have expressed their shock at his death.

Fine weather conditions also saw thousands flock to the beaches and hills on Sunday - creating a busy day for the coast guard.

The Waterford helicopter R117 rescued a man who was injured in a fall near Ardmore, while a helicopter tasked to rescue a cardiac patient in the south Dublin foothills was stood down after medical aid reached him first.

In Malahide, a group of waders caused concern when they were cut off from the beach as the tide came in, but all returned safely.

An Irish Coast Guard spokesman said the service had been kept busy all day on Sunday, but that fatalities has been avoided.