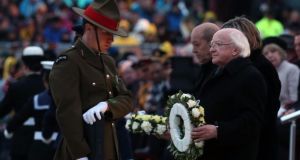 President Michael D Higgins prepares to lay a wreath during a Spirit of Place Ceremony and Dawn Service at the Anzac Commemorative Site in Turkey to mark the 100th anniversary of the Gallipoli campaign. Photograph: Niall Carson/PA Wire. 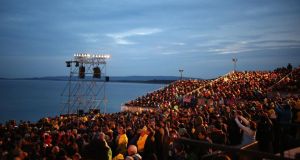 Visitors from Australia and New Zealand attend a dawn ceremony marking the 100th anniversary of the Battle of Gallipoli, at Anzac Cove in Turkey. Photograph: Gokhan Tan/Getty Images.

More than 10,000 Australians and New Zealanders have attended the 100th anniversary dawn service of remembrance at Anzac Cove on the Gallipoli Penninsula in Turkey.

They filled to overflowing a giant amphitheatre of specially erected tiered seating with a panoramic view over the Aegean from whence came the landings at dawn on April 25th 1915 - met by determined Turkish opposition with horrendous consequences.

Many were in their seats at 5pm on Friday and sat through the night, huddled in sleeping bags and wollies, waiting for the 5.30am service to begin. They were solemn during the commemoration, giving subdued voice to national anthems and the single hymn, God of Our Fathers, and neither did they display emotion.

President Michael D Higgins laid a wreath - “on behalf of Ireland” - along with many others, from the United Kingdom, Australia, New Zealand, Turkey and many Commonwealth nations. Speeches came from Prince Charles and the prime ministers of Australia, Tony Abbott, and New Zealand, John Key.

Mr Key’s address was notable for the generosity of spirit towards Turkey. He said he wished to salute the Anzacs, of whom more than 10,000 died ( as well as some 8,000 Australians and 3,000 New Zealanders), “as I salute those who faught against them”.

He thanked Turkey for welcoming descendants of the Anzacs year after year, saying that as a result, Gallipoli for the Anzac countries had now also become a symbol of the power of diplomacy.

“To us,” he said, “Gallipoli is a byword for the best character of Australia and New Zealand. . . [But it was also] a place of fear and waste and loss.”

From the darkness at sea, naval vessels lay still, line astern, their lights disappearing into the distance. Towards Suvla Bay, three bright white lights shone on Anzac Cove, creating an impression of craft approaching to land.

As darkness gave way to half light, a roll of honour, in names and images, appeared on a giant screen. Australia’s indiginous heritage was acknowledged by a performance, at the start of the service, of the didgeridoo by classical musician William Barton. A karanga, the Maori Call to Gathering was performed by two female singers from the New Zealand Defence Forces.

In his address, Prince Charles spoke of the fear among surviving Anzacs as they left Gallipoli, fearing their mates buried behind them would be fortoggen. He read from a letter written by an Anzac soldier, Benjamin Lee, to his wife which he feared might be his last.

“If I am to die, know that I died loving you dearest wife,” he wrote, urging her to live a full life even if he lost his and to ensure that their daughter knew he loved her.

The Ode of Remembrance was followed by the Last Port and Reveille, and the raising of flags. The darkness was banished and bird song could be heard.

As the 10,000 began to filter away, many headed for Lone Pine and Chunuk Bair, the Australian main cemetery and New Zealand memorial respectively, where later today they will pay further solmomn respect.

Many Australians wore special yellow fleeces and wolly hats; New Zealanders black shirts not unlike their rugby team. Four standing together near the VIP stand who had travelled to Gallipoli for the 100th anniversary said they would not have missed it for anything.

“It is to pay our respects,” said the Australian women, “what they showed here is what we are.”