Michael Pyke was a ‘white-haired boy’ to his late mother whose arms he now is back in, mourners told 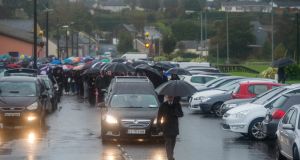 Funeral of Michael Pyke in Ardfinnan, Co Tipperary, on Thursday: his father, three brothers, seven sisters and partner were among the mourners to gather at the Church of the Holy Family to bid farewell. Photograph: Michael Mac Sweeney/Provision

A good man and a gentle soul, is how Michael Pyke (31) was described at his funeral, three days after he was killed during Storm Ophelia.

The electrician was buried during heavy rain in the south Tipperary village of Ardfinnan after a Mass attended by hundreds of people.

His father, Tony, three brothers, seven sisters and partner, Nollaig Hennessy, were among the mourners to gather at the Church of the Holy Family to bid farewell.

He received fatal head injuries when he was struck by a branch from an overhanging tree while clearing a fallen bough from the road between his native Ardfinnan and Cahir on Monday.

The service heard that he was the “white-haired boy” in the eyes of his mother, Moira, who died 11 years ago. His sister Linda said the entire family was comforted that Michael, the youngest of the family, was “back in the arms of our mother” .

“Michael, what can I say, we are heartbroken,” Linda said through tears. “You were the best son, brother, uncle, friend, and boyfriend to Nollaig.”

“Michael, you will always be in our hearts and you will never, ever be forgotten. Sleep well, Michael, until we meet again some day,” she finished, as warm applause rang around the church.

On behalf of his many nieces and nephews, his niece Sophie thanked him for being a great uncle and “such an incredible person”.

In a Facebook tribute on the night before the funeral, Nollaig wrote of her “adventure buddy” because of all the activities they undertook together. “What memories we have. Unfortunately, we are now on different paths, but I know you are never far away. Love you always.”

On Thursday, she touched the coffin and waved as it was placed into the hearse, holding a photograph of the two of them as she did so.

Prayers were said at the Mass for Clare O’Neill and Fintan Goss – and their families – who also died in storm-related events on Monday in Waterford and Louth.

Among the mourners were some of Michael’s friends from Limerick IT, where he was almost finished his apprenticeship, while also working in Dublin, and the college president, Prof Vincent Cunnane.

After the Mass, Michael’s father, Tony, and siblings walked with the coffin as it left the church for St Finnian’s Cemetery while his motorcycling friends led the cortege across the bridge over the river Suir.