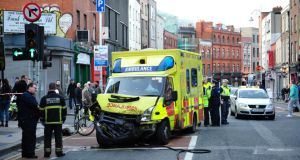 Gardaí are investigating what a spokeswoman described as “a minor road traffic collision” that occurred when an ambulance and a jeep collided on Aungier Street, Dublin, at 6.30pm this evening.

The driver of the ambulance, a man in his thirties, was removed to hospital with minor injuries. A female crew member who was in the ambulance – as well as two men who were in the jeep – were also brought to hospital but suffered no serious injuries.