Women were greeted with ‘sexist abuse’ 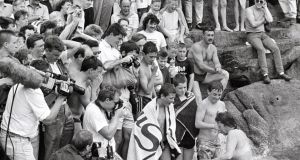 A woman is undeterred by a large spectators’ gallery as she leaves the water after a protest swim at the Forty Foot, the traditional men’s bathing place, in Sandycove, Co Dublin. Photograph: Matt Kavanagh/The Irish Times

Forty years ago tomorrow, on July 20th 1974, a group of determined women invaded the Forty Foot bathing place at Sandycove, Co Dublin, by “land, sea and air”. The bathing place, made famous by James Joyce in Ulysses, had been exclusively male until then and the women were greeted with sexist abuse and male nudity, according to one of the participants, veteran journalist and campaigner Nell McCafferty.

This paper reported the “invasion”, on Monday, July 22nd, 1974, in five low-key paragraphs. “A group of about 10 women claiming to represent the hitherto unknown Dublin City Women’s Invasion Force entered one of Dublin’s traditional men-only public bathing preserves and discovered that there was no legal cause for their exclusion,” it said.

The article went on to describe “the girls” carrying placards and changing into their bikinis. Some of the placards read “out from under and into the swim” and “we’ll fight them on the beaches, we’ll win between the sheets”.

According to McCafferty, the women invaded by land, sea and air. Among them was the late Nuala Fennell, politician and activist, and poet Mary D’Arcy.

“Mary D’Arcy arrived by currach, I jumped off a rock with an umbrella and Nuala Fennell and her husband and two children took possession of a nearby rock,” McCafferty said.

The welcome the women received, however, was not a warm one. “There was loads of sexist abuse from the men in language that was acceptable at the time,” McCafferty said. The women were told, although in cruder terms, that what they all needed was sexual intercourse. Some of the men, who often swam naked at the spot and were upset by the invasion, waved their genitals at the invaders, she said.

McCafferty said she was delighted to be there because the Forty Foot offered the best clean-water swim in Dublin.

Despite being small in number, the group, labelled on different occasions as being from the Women’s Liberation Movement, from Irish Women United and from the Dublin City Women’s Invasion Force, had made a big splash.

From then on, women swam at the Forty Foot, although it took until last year for females to be allowed full membership of the local swimming club, the Sandycove Bathers Association.

McCafferty said when she returned to swim there in 1975, the area was full of men, women and children and one of the men told her it was the best thing that happened to the area. “It humanised it,” she said.