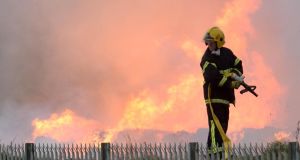 The fire at the Oxigen recycling plant at the Merrywell Industrial Estate in Ballymount, Dublin. Photograph: Dara Mac Dónaill

Hazardous substance asbestos was among materials stored at a waste recycling plant that was engulfed by fire at the weekend.

The highly toxic material, which was in a steel containers beside the main warehouse at Oxigen’s Ballymount Recycling Plant in Dublin 22, was removed before it could catch fire.

The concrete and steel warehouse, which mainly contained waste from domestic green bin collections and from building and household skips, was destroyed in the blaze. Temperatures were so high at the height of the blaze that the walls and roof melted.

He said explosions heard from the plant were caused by argon and oxyacetylene tanks used for welding in the company’s maintenance garage and not from any other material.

Chief fire officer with the Dublin Fire Brigade Pat Fleming confirmed asbestos had been moved from the site as part of fire containment. He said the fire, expected to be extinguished over the next 24 hours, posed particular challenges because of the compacted nature of the materials.

“If this was a normal building fire, you would deal with it much, much faster but because the material is so compacted it is very, very hard to get to the core where the actual fire is; you had mounds of waste and also compacted bails of waste and all of those were on fire at various stages during the incident,” he said.

“You have to pull it out and break it up and then slowly but surely damp it down and kill it.”

He said the oxyacetylene cylinders posed a problem for fire fighters because of their explosive nature, rather than any kind of public health issue.

Run-off water
Water was pumped from three mains supplies including one a kilometre from the site of the fire to help contain the blaze. Attempts were also being made to contain water run-off from the fire, known as “fire-water”, which is likely to contain toxins. Mr Fleming said the drains had been blocked off to prevent the water entering the water course.

At the height of the fire, in the early hours of Saturday morning, more than 50 personnel were in attendance. Yesterday, some 15 fire personnel remained at the scene in Merrywell Industrial Estate along with three fire appliances.

Cause of fire
Mr Fleming said the cause of the fire would be ascertained after it was extinguished and in conjunction with gardaí. He warned residents who could smell smoke to keep windows and doors closed until the fire was completely out.

Though fumes from the fire were detectable across the city yesterday, a spokeswoman for the Environmental Protection Agency said its air quality monitoring system was not showing anything of concern, but it was still advising those in the path of the smoke plume to stay indoors and keep their windows and doors closed. She said both air and water quality in the area would be closely monitored in the aftermath of the fire.

Local residents expressed their concern. One woman who lives close to the industrial estate said she was worried about the fumes and had tried to block the air vents in her home.

“I could smell it like plastic burning all over the house,” she said. “I blocked the vents in the kitchen but it still got in.”

Fiona Ryan from Crumlin said she was worried about her children going in and out to play. Pauline Doherty, who also lives locally, queried what chemicals and gases might be in the fumes. “You could feel it in the air,” she said. “It can’t be good for the environment.”

Mr Harrell said they had no idea what caused the fire. There had been no electrical problems and the plant had been operating as normal up to 10pm on Friday night.