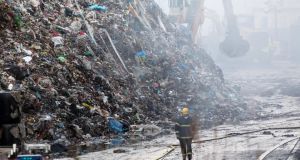 A fire which began at Oxigen waste recycling plant in Ballymount, Dublin on Saturday has finally been extinguished.

A concrete and steel warehouse at the site which mainly contained waste from domestic green bin collections and from building and household skips, was destroyed in the blaze. Temperatures were so high at the height of the blaze that the walls and roof melted.

At one point, 75 firefighters were involved in dealing with the fire at the plant.

Hazardous substance asbestos was among materials stored at the recycling plant.

The highly toxic material, which was in a steel containers beside the main warehouse at Oxigen’s Ballymount Recycling Plant was removed before it could catch fire.

Minister for the Enviroment Phil Hogan told the Dáil today three investigations were under way into the fire. The inquiries were being conducted by the Environmental Protection Agency (EPA), by gardaí and by the Fire Service.