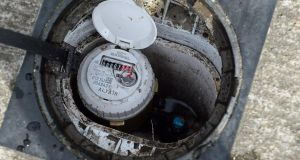 The Fianna Fáil/Green cabinet was told in 2009 the average cost of providing domestic water services to households at the time was about €348 a year. The cabinet was also informed in a confidential memo by then minister for the environment John Gormley it could cost up to €1,000 or more to install meters in 10-15 per cent of properties.

A nationwide meter installation programme could cost between €500 million and €600 million, it was told.

On December 7th, 2009, Mr Gormley brought proposals to the cabinet to remove the ban on domestic water charges , to allow local authorities to bill for water and waste water services and for an installation programme to meter households.

The memorandum was released in a part-redacted form to The Irish Times under the Freedom of Information Act.

The documents showed the cabinet agreed that day on the preparation of the general scheme of a Bill that would provide local authorities with the power to levy and collect domestic water charges.

The Bill would allow for the recovery of amounts due as a simple contract debt, for unpaid amounts to remain a charge on the property and for local authorities to be given power to share information with other agencies.

The memorandum provided for the Minister for the Environment to be given authority to make regulations which would include criteria for determining the level of charges as well as for waivers, methods and frequency of payments and action to be taken in the event of non-payment.

It proposed that households be provided with a free basic allowance and that charges would apply for water use in excess of this level. It said “local authorities will determine their own rates for water use”.

It said the minister supported the programme being funded through local authority borrowing. It said this would have an impact on the government’s budget deficit but the cost could be spread over a number of years.

“The borrowing would be repaid from user charges and the cost of the meter would be factored into the household’s standing charge over time, similar to line rental for telephone services.”

“The Department provisionally estimates that it would cost between €500-600 million to install meters on up to c1.2 million properties connected to public water supplies. However, this cost could be reduced significantly if it is agreed at the outset to exclude the 10-15 per cent of properties which would be more difficult and expensive to meter.”