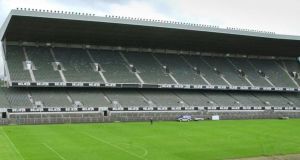 Lansdowne Road:Michael Freer met Bridie Fortune in 1958 when he went out with his team after a match at Lansdowne Road. Photograph: Frank Miller/The Irish Times

A 79-year-old Englishman has made an appeal to find the Irish woman who stole his heart over 50 years ago.

Michael Freer said he met a woman called Bridie Fortune at a dance in Dublin in November 1958. He was on a rugby tour and went out with his team after a match at Lansdowne Road.

Speaking from his home in the UK, Mr Freer told Newstalk Radio that Bridie was “very easy to get on with”.

The pair wrote to each other for a few years and had a date in London in 1961. Mr Freer was working for the London metropolitan police at the time and was called away suddenly, he said.

“I had to go back on a case that was quite urgent,” he told Newstalk. He said left Bridie there, which he was embarrassed about. He also said she had bought two theatre tickets, and he did not have time to pay her back or apologise. “I wouldn’t blame her if she was [annoyed],” he said.

He said the pair never got in touch again.

Mr Freer got married and had children, but his wife has since died. Now he is looking for the Irish girl who got away.

“I have always thought about her, yes. I thought I let her down quite badly,” he said.

He’s not sure where Bridie was from, but he assumed she came from Dublin. He remembers that she had dark hair and was a “very attractive, very tidy girl”. She had a brother who was a priest.

He told John Murray on RTÉ Radio that he “heard from two Bridies, but they were the wrong ones”. He said that trying to find her is “like a needle in a haystack” because Bridie Fortune “is a popular name”.