Campaign to recruit 1,450 soldiers and sailors with emphasis on women 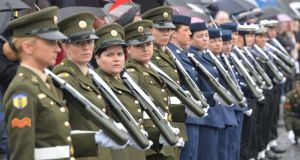 Currently about 6.5 per cent of Defence Forces members are women, which is slightly below the international median. Photograph: Alan Betson

Are you a young woman who likes playing football? Do you have a determination to win?

If yes, prepare to be targeted by the Defence Forces, because they reckon you are the sort of woman who will make an excellent soldier or sailor, and they’re going all out to increase the number of people just like you in the ranks of the Army and the Naval Service.

Yesterday, the organisation launched a campaign to recruit 1,450 soldiers and sailors over the coming two years, with a particular emphasis on women.

This year, there are vacancies to be filled for 550 Army recruits, at the rank of private, and 100 vacancies in the Naval Service at the equivalent rank which is ordinary rating. The Navy will take in a further 100 ratings next year, while a further 750 positions for private in the Army will open up in 2017.

Currently about 6.5 per cent of Defence Forces members are female, which is slightly below the international median, and Minister for Defence Simon Coveney has said he would like to see that at 12 per cent.

The August 2015 White Paper on defence made increasing the number of females in the Defence Forces a priority, reflecting a 2000 UN Security Council resolution, 1325, requiring parties to conflicts, which includes peacekeepers, to have greater awareness of the effects of war on women and the particular roles they can play in post-conflict situations.

Would-be recruits will first do a psychometric skills test online and can avail of guidance for a six- to eight-week fitness preparation course before taking the entry-level fitness test. Those passing the test, will then have 17 weeks’ training to become two-star privates and a further 12 weeks to be three-star recruits and be eligible for overseas service.