Cork GP cleared of assaulting teenage girl at his surgery 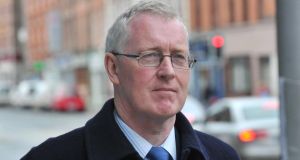 Cork doctor Kevin Mulcahy has been found not guilty by a jury of indecently assaulting a 13-year-old patient who alleged that he had fondled her breasts during a visit to his surgery almost 25 years ago. Photograph: Daragh Mc Sweeney/Cork Courts Limited

A Cork doctor has been found not guilty by a jury of indecently assaulting a 13-year-old patient who alleged that he had fondled her breasts during a visit to his surgery almost 25 years ago.

Dr Kevin Mulcahy (56) of Cregane, Lombardstown, Co Cork had denied the single charge of indecently assaulting the girl at his surgery on Strand Street in Kanturk, Co Cork on a date unknown between September 1st 1989 and June 22nd 1990.

Today at Cork Circuit Criminal Court on the third day of the case, the jury of eleven men and one woman took just two hours and 15 minutes to find Dr Mulcahy not guilty of the single charge against him.

The complainant in the case, now a 38-year-old woman, broke down and began to weep in the public gallery when the verdict was read out by Registrar Richard O’Connor and relatives gathered around to comfort her.

The woman had told the court that she had gone to Dr Mulcahy with a cough and a cold as her own GP was not available. Her mother brought her to Dr Mulcahy’s surgery in Kanturk and it was her first time attending him, she said.

“He examined me and he suggested that I would come back in two days to check on me and that I would be OK without a prescription,” said the woman, adding that when she returned two days later, there was no receptionist and no one present except Dr Mulcahy.

“He brought me into the surgery, He closed the door. He asked me to take off my top and my bra. I sat sideways on the examination bench. He sat behind me. He rubbed my back. He put his hands under my arms and put his hands on my breasts.

“He fondled and massaged my breasts for what seemed like five or ten minutes. His breathing got heavier and deeper. That is all I could hear. He stopped then and said it is OK, you can get dressed now,” she told the court.

Dr Mulcahy denied the charge and said that he had no recollection of ever treating the complainant but was so shocked when confronted with the allegation of sexual assault that he had contemplated taking his own life.

“It hit me like a train, I was absolutely flabbergasted. I threatened suicide. I got into the car and I put a pipe on to the exhaust and into the car. I phoned my wife. I said to my wife if you don’t get me to a psychiatric hospital I am going to commit suicide,” he said.

Dr Mulcahy said he had no recollection of the complainant and did not recognise her when she gave evidence on the opening day of the trial on Monday. “If she walked down the street I would not recognise her,” he said.

Asked by defence counsel, Blaise O’Carroll SC if he touched her breasts, he replied: “I did not touch her breasts. I have no recollection of seeing her, it certainly would not be my policy to examine anyone’s breasts… It never happened. It never would happen.

“I never acted inappropriately with this lady. I can guarantee you whatever allegation is being made against me it never happened as far as I am concerned.”