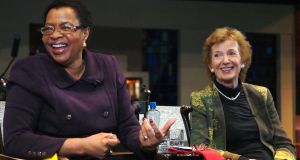 Former president Mary Robinson has said she is “hopeful” that there will be sufficient political will to secure an agreement on climate change at this week’s COP21 summit in Paris.

Mrs Robinson, who flew to Paris Sunday , has paid tribute to the leadership shown on the issue by French president Francois Hollande, US president Barack Obama, and the commitments to zero carbon made by countries like Costa Rica and Ethiopia.

However, she expressed sorrow at the “language of war” used by President Hollande immediately after the November 13th Paris attacks, and called on Europe to plan for “circular migration”, given that climate change will exacerbate forced displacement.

She was speaking in Ballina, Co Mayo where she hosted an international human rights lecture by Mozambican politician and humanitarian activist Graça Machel. Mrs Robinson recalled that during her time as UN High Commissioner for Human Rights she had “pleaded” with the US administration of then president George W Bush to treat the 9/11 attacks as criminal acts against humanity.

Referring to war “ inflates those who cause these terrible killings” of civilians, she said.

“It inflates them into being somehow warrior, and [THE CONCEPT]that being at war is not so bad, it’s a status,”she said at a press briefing.

“And actually if you say you are at war, human rights tend to be given much less attention,”she said, noting that President Hollande’s language had since “shifted slightly” to refer to the Paris attacks as “crimes”.

“ It is very hard on young Muslims now in France, for example, because of the stigma of insecurity,whereas i f we identify that there are radicalised young people we understand some of the reasons for the radicalisation - but it doesn’t excuse that activity,”she said.

The attacks last January and in November had affected the “spirit of Paris”, she noted, and there would be a lot of empathy with the French –“ because France for its own reasons first of all offered to host the Cop21 summit”, she said.

Noting that climate change and human rights are inextricably linked, she referred to the central role of women – a theme also expanded on by Ms Machel during her address, chaired by journalist Olivia O’Leary.

Mrs Robinson expressed the hope there would be a commitment in the COP21 agreement to zero carbon emissions by 2015, with five-yearly reviews.

“ It’s very significant that 175 countries have indicated to the process what they are going to do in 2020,2025 and 2030,”she said, but a UN analysis had noted that warming could still rise by 2.7 to 3 degrees Celsius “if everybody did everything they promised”.

“And that’s not acceptable, because it’s far too dangerous - every child born today will live through the future that we are now going to see,”she warned.

While Europe had made a “serious commitment” to a 40 per cent reduction in emissions , she would be happier if “Ireland did more”, she said.

Climate change will be a “driver of displacement of people within their country and across borders”, she said, and plans must be made for “circular migration “ which enables people to “come as migrants, give them the skills and the ability to build up some assets” and return home to help their own countries become “more resilient”.

There was a need for a “different narrative” which highlighted how “productive, creative and transformative” they had become, she said.

On tackling climate change, Ms Machel said that “we have no time to wait until we take this very bold step which we are required to reverse “.