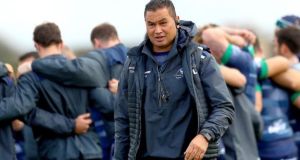 John Fallon writes that arrival of Pat Lam, a New Zealander of Samoan descent, provided the inspiration for this year’s Pro12 final win over Leinster. Photograph: The Irish Times

Connacht Rugby was close to disbandment seven years ago, according to a new book on the highly successful team.

Journalist John Fallon, who served as the province’s manager in 2003, documents how the team came close to being wound up in 2009 when the Irish Rugby Football Union (IRFU) conducted an investigation into its affairs.

Just six years before, more than 2,000 people marched on IRFU headquarters in Dublin in support of the professional team in the west.

The province survived, says Mr Fallon, and the arrival of Pat Lam, a New Zealander of Samoan descent, provided the inspiration for this year’s Pro12 final win over Leinster in May at Murrayfield, Scotland.

He describes it as “ probably the most unlikely title victory by any team since rugby went professional in 1995” and Connacht’s “first silverware in its 131-year history”.

Photographer Billy Stickland and his Inpho sports photography colleagues have contributed to the book, which includes detailed team results from 1996 to 2016.

Last month Irish Times journalist Gerry Thornley marked the publication of his account of the team – Front Up, Rise Up: The Official Story of Connacht Rugby (Random House Penguin).

Fallon’s Connacht – The Team That Refused to Die, with photography by Inpho, is published by Media West at €19.99 hardback.