Campaigners opposed to the Corrib gas project pay tribute to the women deceived into forming relationships with the men, one of whom spent time at a Shell to Sea workshop in Mayo 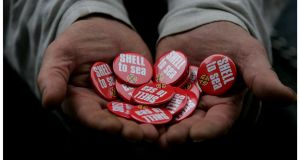 One of the undercover officers, Mark Kennedy, made several visits to Ireland, including attending a Shell to Sea workshop in Mayo. Photograph: Bryan O’Brien

Campaigners opposed to the Corrib gas project have paid tribute to seven women in Britain who have received an apology from the Metropolitan Police for being deceived into forming relationships with undercover officers – one of whom spent time at a Shell to Sea workshop in north Mayo.

The British Metropolitan Police has apologised unreservedly to seven women who were deceived into forming “abusive and manipulative” long-term relationships with the undercover police officers. Undisclosed compensation has been paid to them.

The apology was issued as part of an out-of-court settlement in a case that the seven women took, alleging the deception caused them emotional trauma.

One of the undercover officers, Mark Kennedy, made several visits to Ireland, during which he participated in the Dublin May Day protests of 2004, spent time with objectors to the Corrib gas project in north Mayo and met protesters opposed to US military use of Shannon airport.

In an interview with the Guardian in March 2011, he confirmed that he involved himself in eco-activities in 22 countries, posing as an industrial climber, and said his estranged wife and young children lived in Ireland.

“It is of grave concern,” Mr Higgins said in January 2011, noting that “this type of activity undermines respect for the law and it is very sinister in that it can damage good causes.”

Rossport resident Mary Corduff, who learned afterwards that Kennedy had visited her home during his visit to a Shell to Sea workshop with British and Icelandic activists in March 2006, said that the British women who took the case had “great courage”.

“It is great justice for these women, and they had better luck than we have had here in pursuing cases of injustice with the Garda Ombudsman over policing of Corrib gas protests,” Ms Corduff said.

Ms Corduff said she did not specifically recall Kennedy, but “there were hundreds of people calling, and he would have got the same hospitality as everyone else”.

Eoín Ó Leidhin, one of the longest members of the Rossport Solidarity Camp formed to support the north Mayo community opposed to the gas project, said he “saluted the brave campaigners who worked so hard to expose this systematic abuse of state power in Britain”.

Mr Ó Leidhin noted that Kennedy had said afterwards that he would “never go abroad without authority from my superiors and the local police”.

He said the Government here “continues to refuse to answer how often and for how long they allowed undercover British police to spy on campaigners in Ireland”.

The Department of Justice said on Friday: “It was indicated at the time that, as with any other individual, the person in question for as long as he may have been here, would have been completely subject to our laws, and that any person who might have information should make that information available to the appropriate authorities.”